In case you’re looking for something rather unusual but at the same time easy to reach and organise, you’re on the right page: 3-day Eastern Europe Trip itinerary could be a great option for you. In this post, I’ll tell you about my experience in travelling around Belarus, Lithuania and Latvia.

This Eastern Europe trip itinerary could be a great idea for a long weekend, especially, if you start it in Latvia. Latvia is a hub for AirBaltic, but other low-cost airlines like WizzAir and Ryanair also fly there. You can find the cheapest flights to Latvia or Lithuania on Skyscanner or Momondo. Belarus recently introduced a visa-free regime (but only if you fly to Minsk/from Minsk), otherwise, you need to obtain a visa (if you’re planning to cross a border with Belarus by land).

I started my Eastern European Trip in Minsk (but I didn’t take the plane. I was based in St. Petersburg, Russia back then and took a night train to Minsk).

In Minks, be ready to walk a lot. The city is not that big, and at the same time, it’s very quiet and green. Some places can be easily accessed walking. In Minsk, you would feel like in the USSR: the city looks like it was stuck in the 80s: there are few cars on the street, there are huge concrete buildings and the monuments of tanks everywhere.

But nonetheless, Minsk is charming! It’s not similar to any of the cities in Europe. And it’s also very very cheap. For the entire day in Minsk, I had just 25 euros. During the day I went to eat 3 times, bought a chocolate in a chocolate factory’s official cafeteria, had a ride in a Ferris wheel and by the end of the day I had 14 euros left. Sounds great, doesn’t it? The only expensive thing in Minsk was the hotel, so instead of sleeping in the capital of Belarus, I took a 4-hour bus to Vilnius, Lithuania. Recently, however, there was an increase of the number of nice cheap hostels (with private rooms), so you can stay in Minsk overnight.

What is there to do in Minsk? If you take a train, you’ll arrive at the main Railway station, which isn’t that far from the city centre. You can obviously take a bus, but we decided to walk because the weather was amazing (it was June). After a 20-minute walk, we arrived at the Alexandrovsky Park and the Residence of the President of Belarus. The whole district looks very “Soviet”, just look at it: 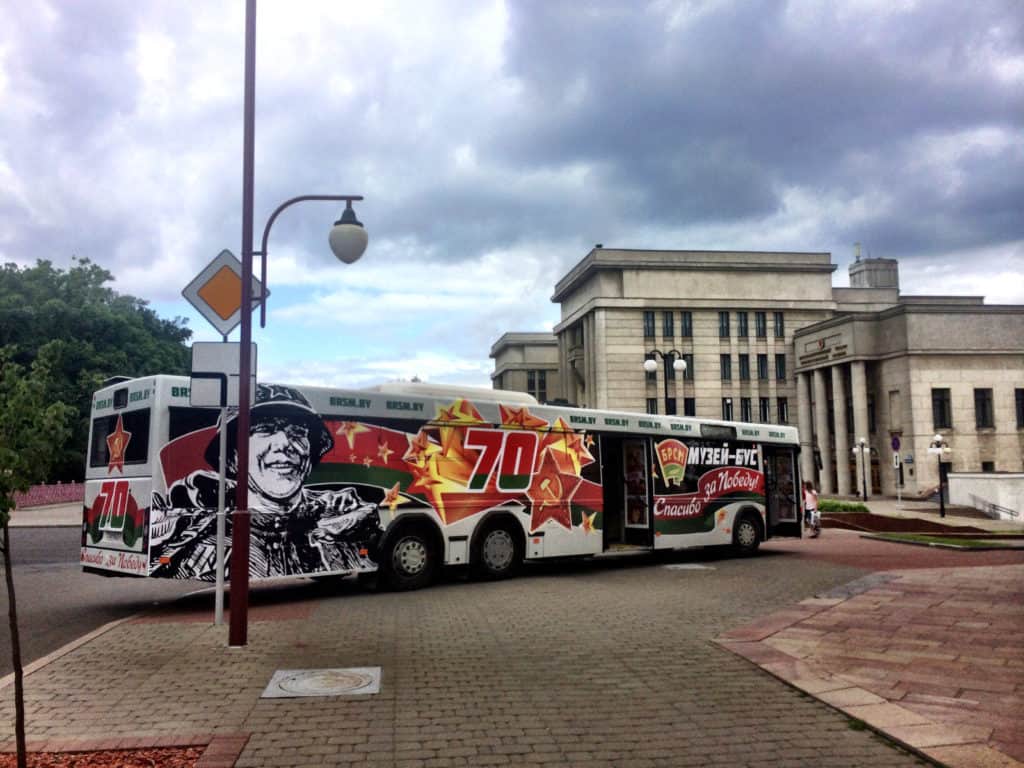 The city centre of Minsk, Belarus

Later I went to the only place, that was reconstructed after the WWII: the Old Town with the beautiful white Churches and Cathedrals. Supposedly, it looked just like that before the Germans had bombed the city. Unfortunately, not many buildings survived the war. But the ones, which were restored, look gorgeous. 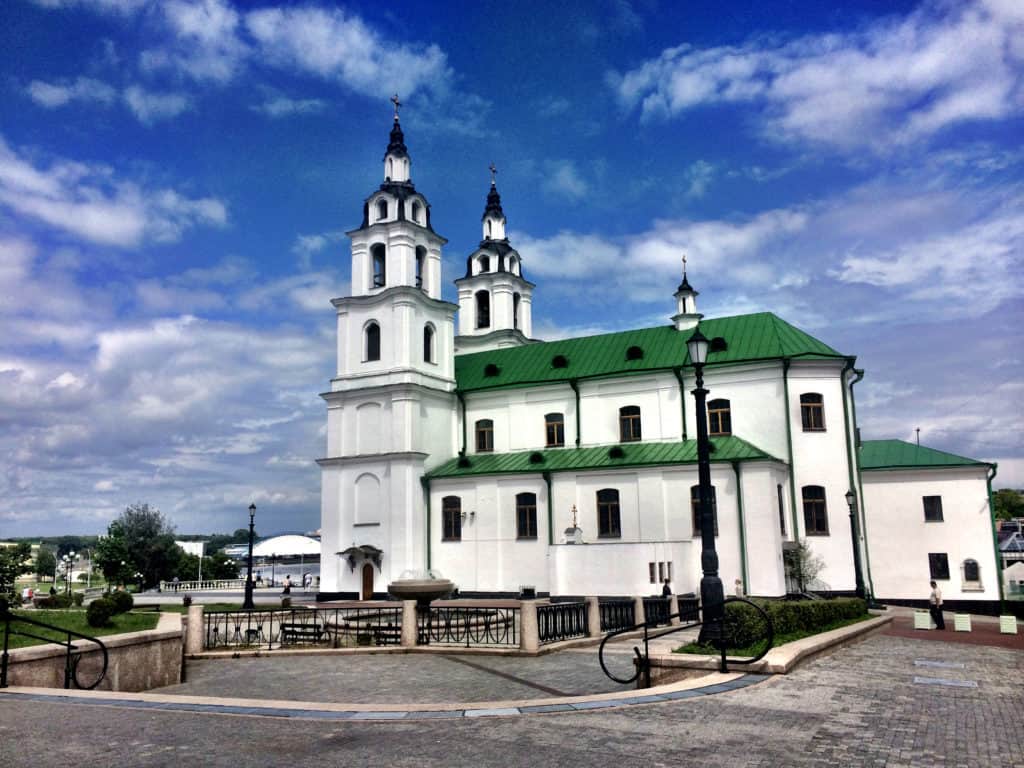 In the afternoon, I went to the Kamunistichnaya street and the Yanki Kupaly Park: this district also looks pretty and it’s definitely worth visiting. I also visited the Gorky Park, where I took a ride on a Ferris wheel. From there you can see the whole city very well, and even though the panorama can’t be described as something truly spectacular, it’s pretty nice (And I’m obsessed with panoramas anyway). 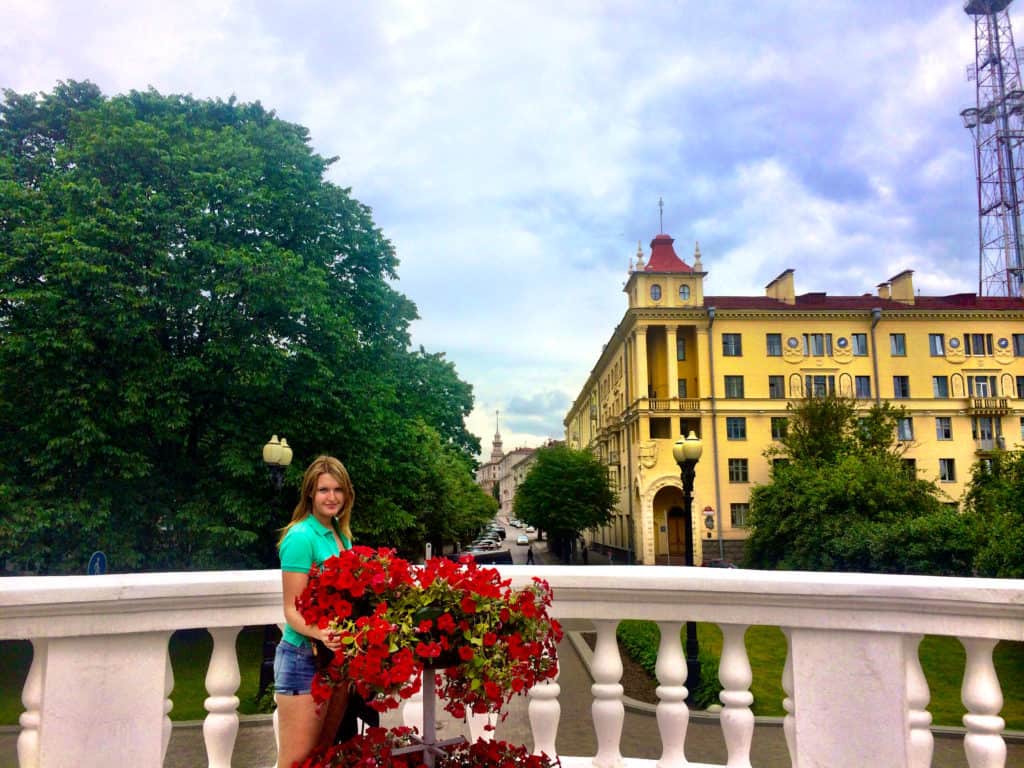 Enjoying the city centre of Minsk

Just before catching a bus to Vilnius in the afternoon, I went to the Island of Tears. It’s something very unique: a monument, which is dedicated to those, who haven’t returned from the war, but what’s unique is not the topic of the memorial, but the way it looks – very impressive. 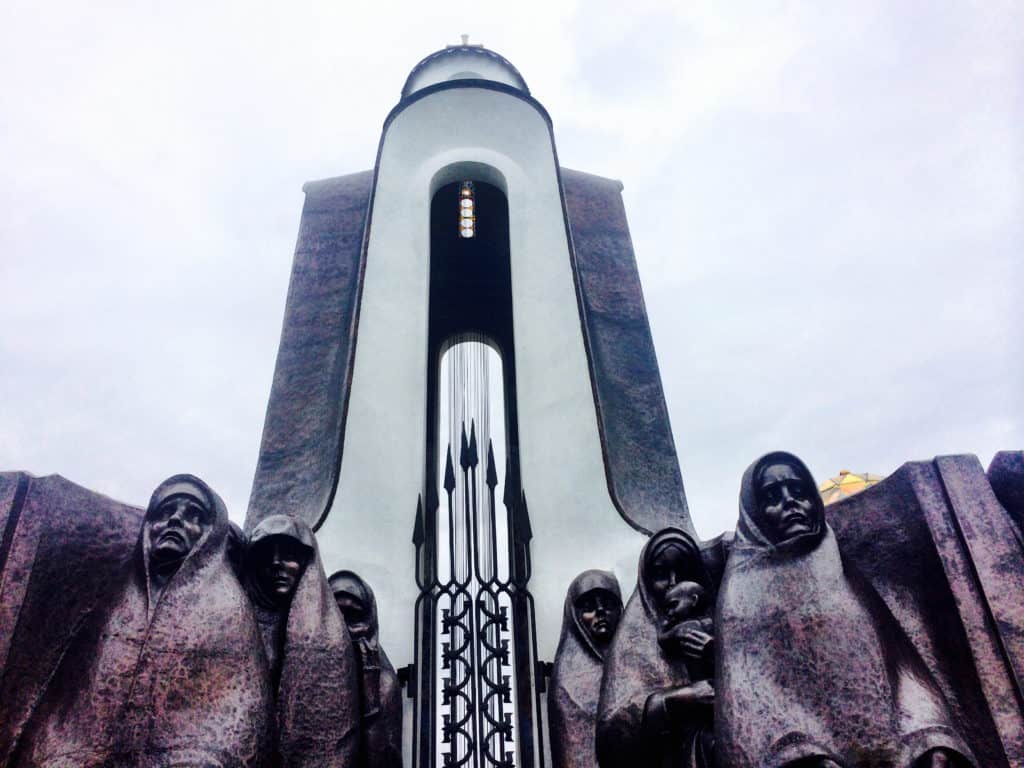 The Island of Tears, Minsk

After that, I returned to the main railway station, where I took my bags from the locker (the locker was also very cheap, something like 30c for the whole day) and headed to the bus stop in order to take a bus to Vilnius, Lithuania.

If you want to know more about Minsk and check for things to do there, read this post I wrote about Minsk. In case you’re visiting Minsk and don’t speak the language (Belarussian or Russian), I recommend you to take a tour around the city. I honestly think that Minsk is pretty awesome and definitely deserves to be a part of the 3-day Eastern Europe trip itinerary.


The next stop of the 3-day Eastern European trip was Vilnius. The bus ride to Vilnius took only 4 hours (including the border control), so at 11 pm I was at the main bus station of Vilnius and walked to the hotel for 15 minutes. I stayed with my best friend at the hotel called Domus Maria, which used to be a Monastery before. I must admit that staying there was a pretty great experience and I definitely recommend it to you. On the next morning, I went walking through the beautiful Old Town of Vilnius and also visited the fortress (which, unfortunately, was in a very bad condition).

The newer part of the city with the Basilica as white as snow was on the contrary in the best condition. The street leading to the Basilica, National Museum and the small tower is amazing for walking, moreover, it has plenty of cafes and restaurants, where it feels nice to have a cup of coffee and a cake. 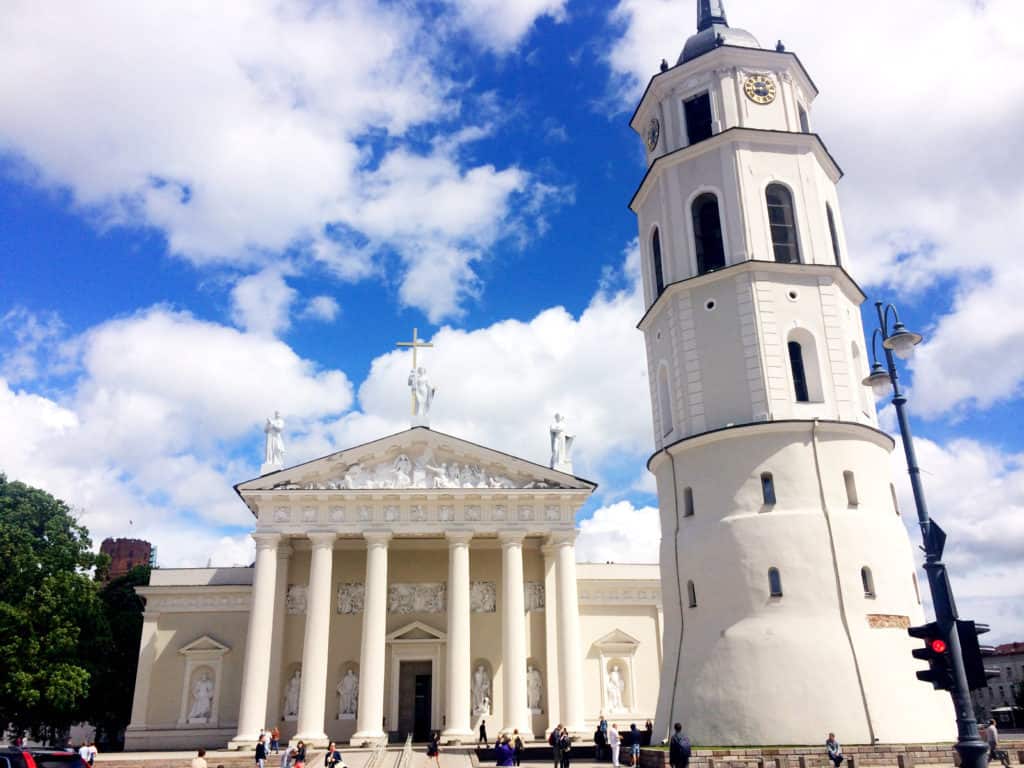 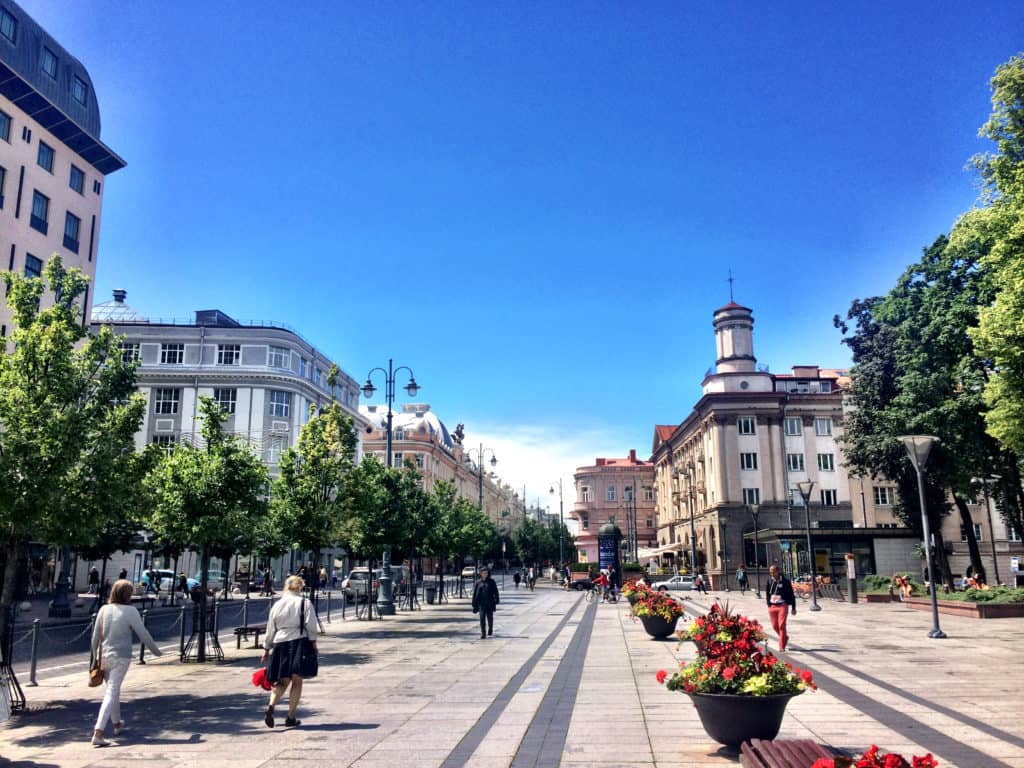 If you want to see the panorama of Vilnius, head to the hill of the three crosses. The view is amazing from there! 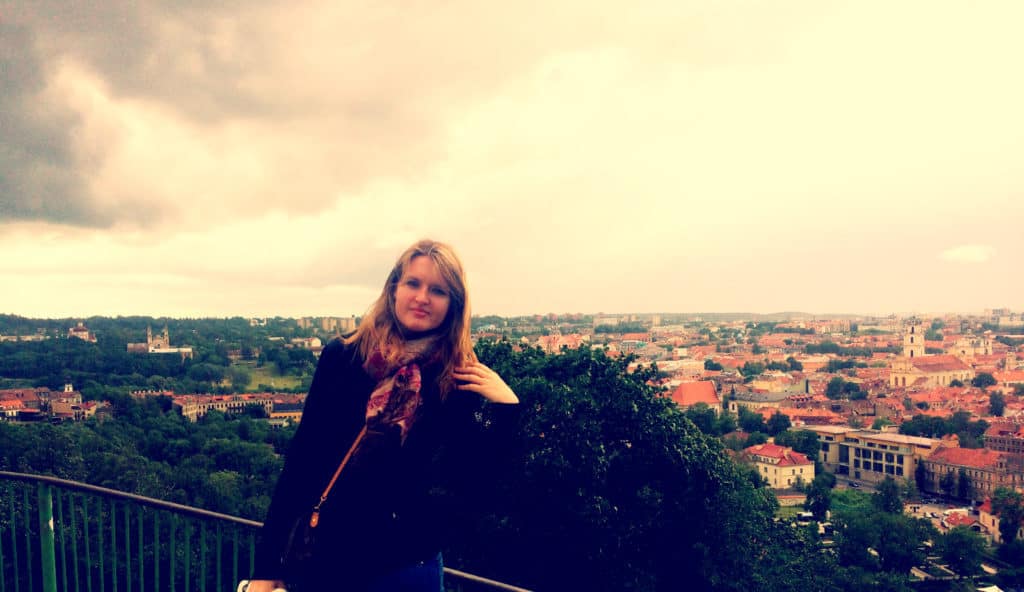 The panorama of Vilnius

Now excuse me for the quality of my photos: all of them were taken on my old iPhone 5S and I didn’t take my DSLR with me on that trip. Also, apparently I thought that adding a bit of sepia to the photos in the Camera+ app is awesome (thank God I don’t think so anymore).

If you are able to stay in Vilnius a little bit longer, you can also discover some other parts of the city, where the Bernardine Church is located and the zone with plenty of parks. But I had to move on and take a bus, which would bring me to Riga, the capital of Latvia, again in just 4 hours. I bought all my tickets on Eurolines and was satisfied with the buses I took. The next stop in my Eastern European trip itinerary was Riga.

In Riga, I got sick, so I can’t provide you with the most comprehensive guide to the capital of Latvia. However, all the things I managed to see, where really impressive. First of all, the Old Town of Riga is really beautiful: it’s full of cathedrals and churches, old buildings and …. clubs. Yes, surprisingly, Riga is one of the best places for partying in the whole Eastern Europe. So if you want to party a lot and cheap, and during the day enjoy the beautiful city, you can go there as part of the Eastern Europe trip itinerary or just to Latvia (why not?). 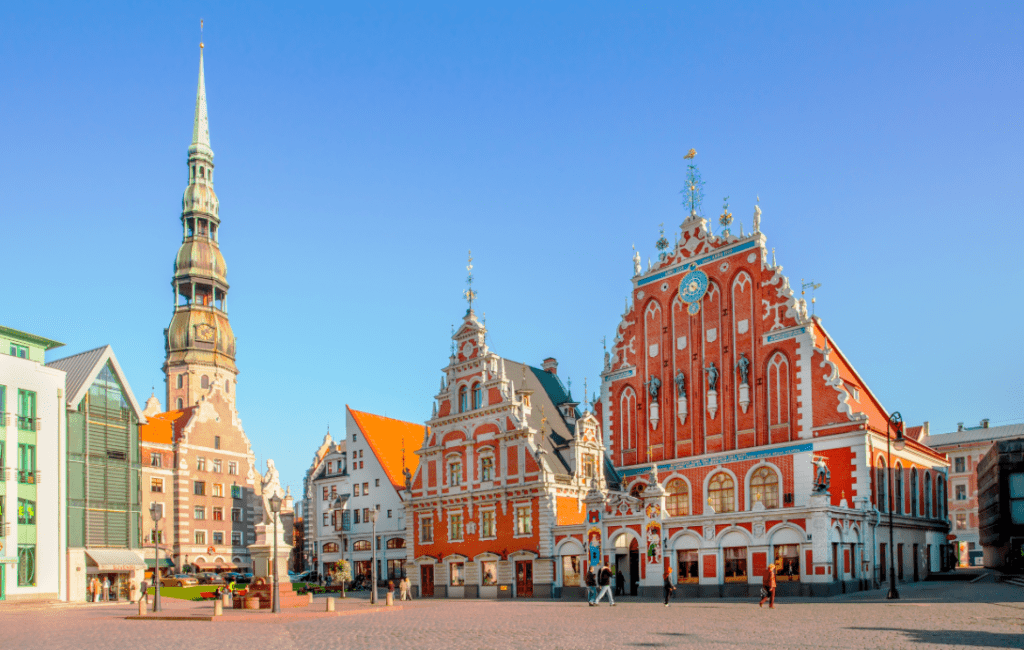 Secondly, there is a market (Old Market) which seems to work 24 hours. I arrived at my hostel around 2 am (and the hostel was right in the middle of the market, not precisely the best place, I was actually very scared to return there at night, so I wouldn’t suggest you staying there), but parts of the market were already (or still) working. In case you’re looking for a nice place to stay in Riga, check the Tree House (with the exceptional 9.6 rating based on 900+ reviews – probably the best rating I’ve seen in my life) or the Neiburgs Hotel.

Liked this post about the Eastern Europe Trip itinerary: Belarus, Lithuania and Latvia itinerary? Share it on Social Media!

Belarus sounds like a country that I would take the time to go through the rigorous Visa application process just to see its post-Soviet era infrastructure. Definitely a place that is stuck in time much like Cuba is (for now) with the U.S. Trade Embargo still in effect since the early 1960s.

It's totally true :) But that's why it's charming in its own way - not many countries are like that

I have been to Vilnius and Riga lately. I have went there mainly for the bookfairs, so I didn't see too much of the cities. Well, at last not too much of Vilnius, because I went to Trakai to see the Karaim culture. :D I have seen Basilica only for a second, as I had a free bus to the bookfair going from there. I haven't seen the panorama either, but I still had fun just wandering through towns and discovering things like the last synagogue. :D In Riga I have seen more. Much more as I was more wandering through the town. I loved the wooden houses. In both Vilnius and Riga I have went to the Museums of Occupation - I recommend. More on my blog. :D Cheers.