Skip to Content
5 shares
This post may contain affilliate links. It means that if you buy something through one of these links, we might get a small commission at no extra cost to you. Affiliate commission helps us keep this travel blog running.

In this post, I’ll tell you about the best tour we ever had in Edinburgh – the Edinburgh Vaults Tour (Doomed, dead and buried) with Mercat Tours.

In fact, I always wanted to go on one of these Ghost tours in Edinburgh (since September 2014, when I just started studying at the University of Edinburgh) but never had a chance. So now, when we finally had an opportunity, we booked an Edinburgh Vaults Tour with Mercat. They have quite a few tours available and you can check them on their website or Tripadvisor. 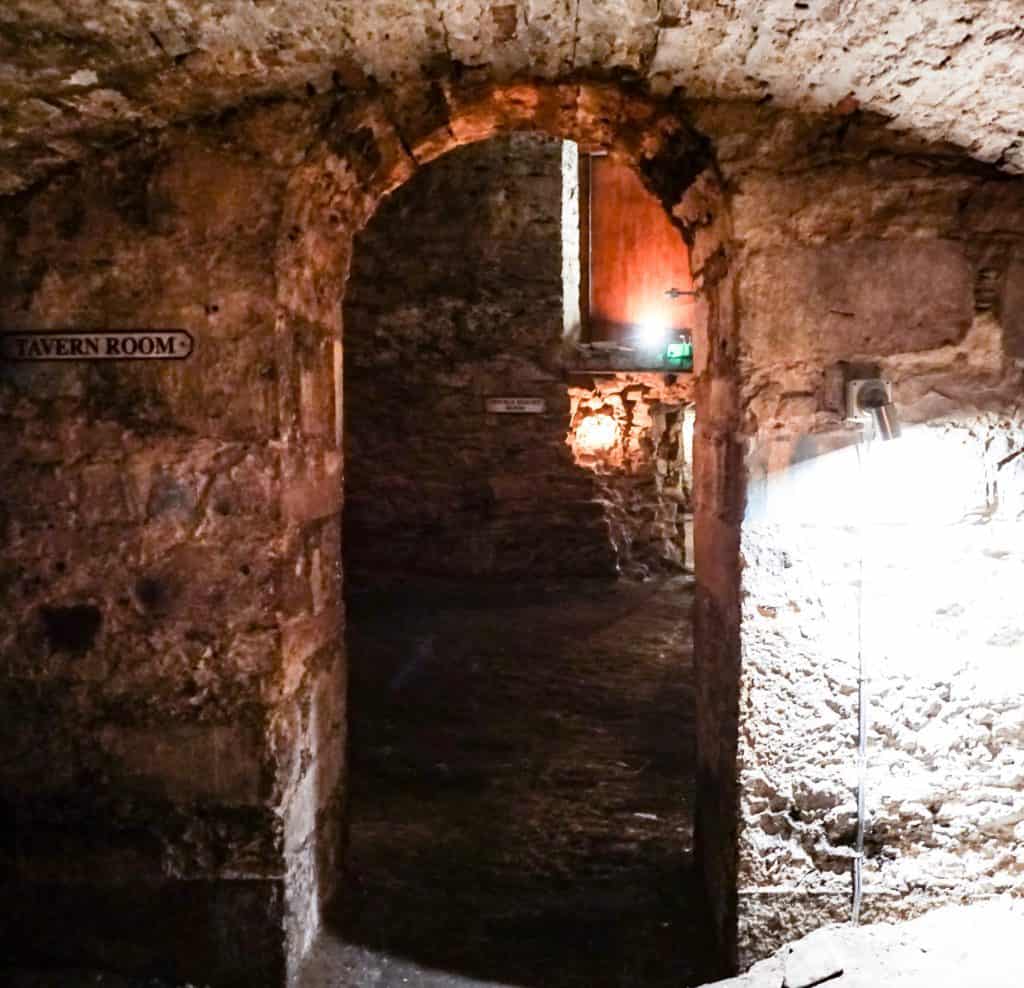 However, we choose the 18+ Edinburgh vaults tour called Doomed, Dead and Buried (full of creepy stories) in the evening (it started at 7:30 pm and lasted for almost 2 hours) and couldn’t have enjoyed it more. Everything was great – the perfect timing (we took the tour in April and it got dark around 8:30 pm, so we were at the cemetery in time for the twilight), amazing guide Ciara, who was a great narrator and a fun group of tourists, we were part of.

At first, we walked through a couple of Closes in Edinburgh. Close is a very narrow street in Edinburgh Old Town, which used to be the only path between really tall buildings. Did you know that the residential buildings in medieval Edinburgh could reach 15 floors? That’s unbelievable, but it’s true. The most prestigious flats would be on the ground floor and the worst ones would be the last floors, because of the looseness and weakness of the whole construction. Only the poor would climb 15 floors to get to their slum apartments and risk their lives living there. 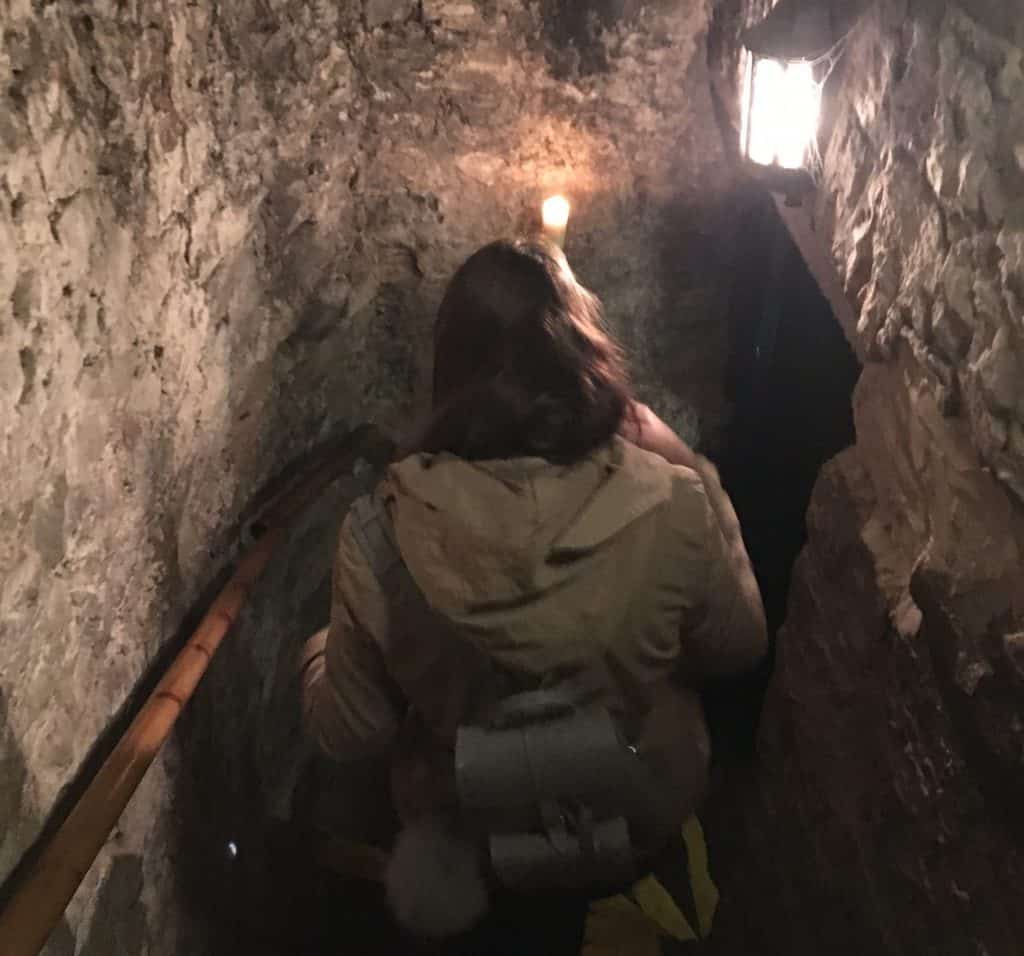 Going down to the Edinburgh Vaults

After walking around a couple of streets in Edinburgh and listening to a couple of really interesting and crazy stories, we finally approached the Edinburgh vaults, which are located under….Mercat Tours office! So you can only access them if you take an Edinburgh vaults tour (also, of course, it’s not safe and advisable to walk there alone – another reason to take a tour).

I must admit, that I felt uneasy inside. I didn’t see any ghosts (I think no one from our tour did), but there was something in the air, which made breathing harder. It was very wet and warm and also dark inside the vaults, so if you have a vivid imagination, this tour could be too scary for you. I won’t tell you any more secrets of the vaults, which used to be a workspace for craftsmen who worked for the shops on the surface of Edinburgh, otherwise, it won’t be that interesting for you to listen to the tour.

When we finally left the Edinburgh South Bridge vaults, we headed to the cemetery on the Royal Mile to learn more about the part of the city, which used to be the outside the city walls. There were many creepy stories associated with this cemetery, but it’s also famous and remarkable because of the Adam Smith’s grave. After the tour finished, we headed to the Tollbooth Tavern (one of the most beautiful pubs in Edinburgh) to get warmer, because it was freezing outside (yes, it can be very cold in Edinburgh in April). 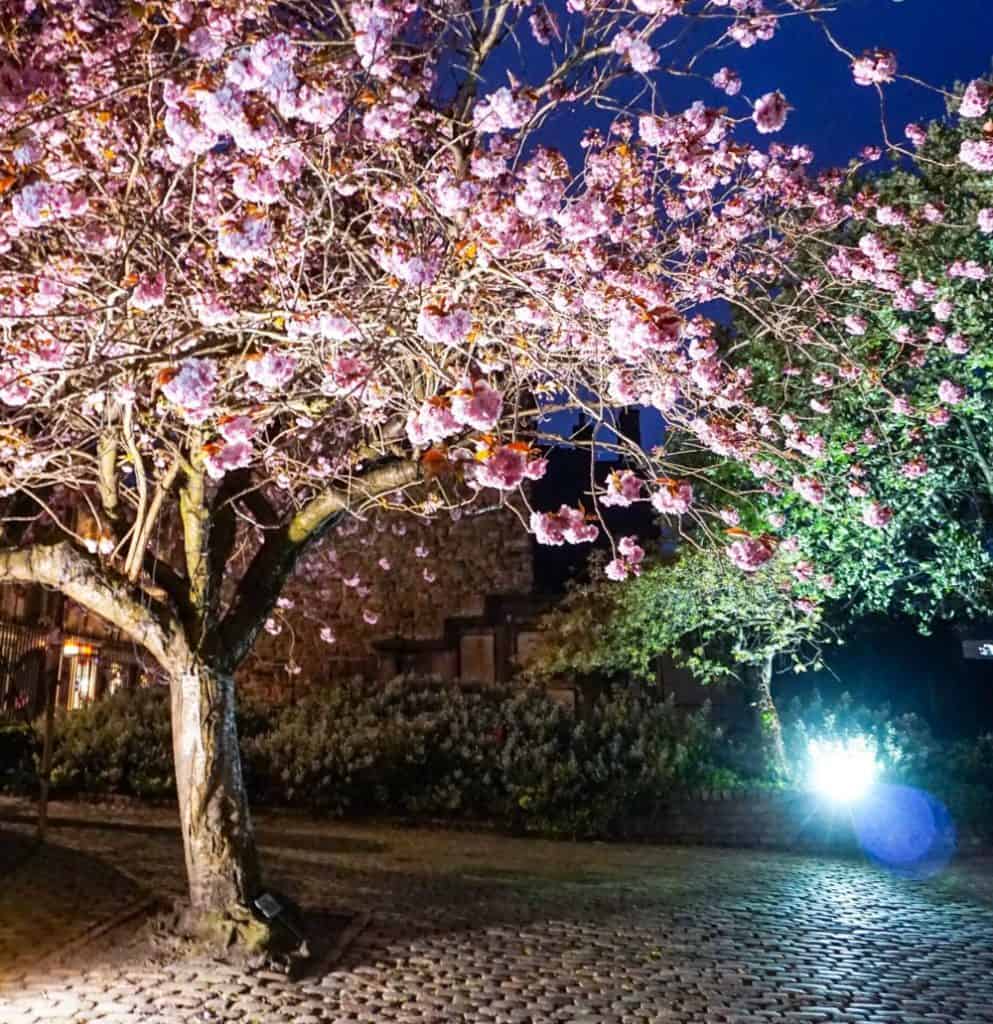 Heading to the cemetery

I must admit that the Edinburgh Vaults tour was amazing and I must say big thanks to Mercat Tours and our guide Ciara for telling us so many interesting facts about the history of the city. And in case you’re hesitating, whether to take this tour or not, I would definitely recommend you to take it, since we liked it way more than The Real Mary King’s Close or Edinburgh Dungeon experience.