This post is about New York City or NYC in winter and in summer. You’ll find out what’s the best time to visit NYC if you only have two options.

Visiting New York City is a dream of lots of people all around the globe. The Big Apple is really attractive: with its famous shops like Saks 5th Avenue, places like Central park, buildings like Empire State Building and monuments like the Statue of Liberty it just lures tourists to the “center of the world”. New York City was shown in so many movies, series, and documentaries, that almost everyone knows at least something about the city. I never ever wondered, what’s the best time to go to New York City – it seemed perfect to me all year round!

However, NYC in winter and NYC in summer can seem like two absolutely different places, that have nothing in common. I fell in love with New York City in winter, but I hated it in summer. How can it be true? Well, I’ll try to explain to you why.

When I was in New York City in winter (end of January – the beginning of February), I came with my parents and stayed in a really nice hotel close to the Penn Station. We had money to go to mid-range restaurants almost every day and visited most of the museums. We also met our family’s friends, who actually live in New York and and they showed us the best spots in Brooklyn. I must admit, I really enjoyed every moment of the 2-week trip. We had dinners in a Korean district (never tried Korean food before), in a restaurant, where Pierce Brosnan was sitting at the next table, in a Trump tower (now it’s even funny). We also had fast food, of course, but mostly it was time nicely spent – on excursions, in museums, shopping, walking and taking photos. 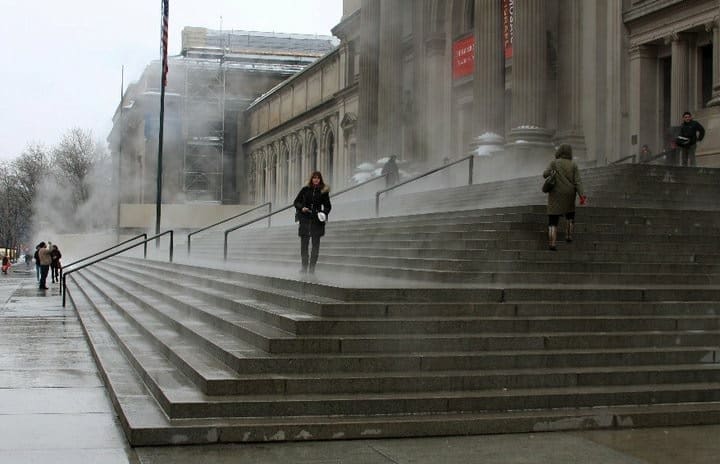 NYC in winter wasn’t that crowded – 3 weeks after the New Year the shops were almost empty, and we could enjoy our time in the giant Macy’s on the 34th street. Even the Times Square wasn’t that crowded. It was also very cold – around 5 to 10 below zero Celsius, maybe that’s the reason why the city was so empty. The streets were clean, the underground…well, almost clean. New York  City in winter seemed like a great wealthy city, suitable for long walks and fancy dining. Like a city I’ve always known from the movies. And I fell in love with New York City in winter. 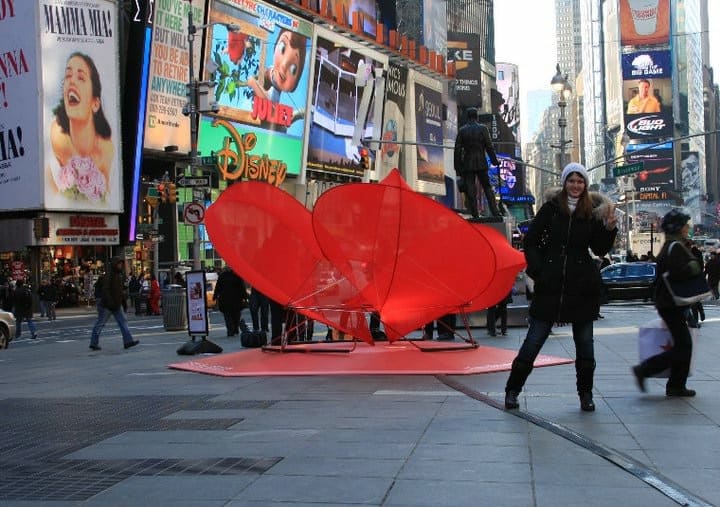 That was the reason why I returned in the end of August – again for 2 weeks and visited NYC in summer. I stayed in a student residence on the top floors of the hotel New Yorker. This time I was completely alone. I was sharing a room with a lovely neighbor, but she had classes early in the morning and I had them in the afternoon, so we could only go out in the evening. I was 20 at that time, so I couldn’t really “go out” – we were just going for burgers and visiting the cinema three times a week. I liked this feeling of independence, but… the city was different.

New York in summer has really disappointed me! In the beginning, the weather was hot and humid, so I would only survive outside in the street in a short dress. But then I would enter the underground and it was FREEZING cold there! I was always like “What the hell, why can’t it be adjusted better, so people don’t have to freeze or bring a jacket and PANTS with them to the metro”. Eventually, I got sick, of course (who wouldn’t).

Moreover, the city was overcrowded – it wasn’t possible to walk around without somebody pushing you and so on. Traffic on the streets was just unbearable. People were shouting and crossing streets on the red light and then showing their middle finger to everybody. The streets were dirty and full of trash, the underground was dirty too. The streets were full of beggars, who were quite rude and aggressive if you didn’t give them money. Also, it was dangerous. Once, we were returning from the cinema around 1 am at night and decided to take the 8th avenue (we thought it’s centric enough to walk there). However, people were trying to tell us something nasty all the time, and somebody was even trying to grab me. We weren’t dressed provocatively and weren’t even wearing makeup! If not the police car on the other side of the street, I think we would have been in trouble. Such an awful experience in NYC in summer! 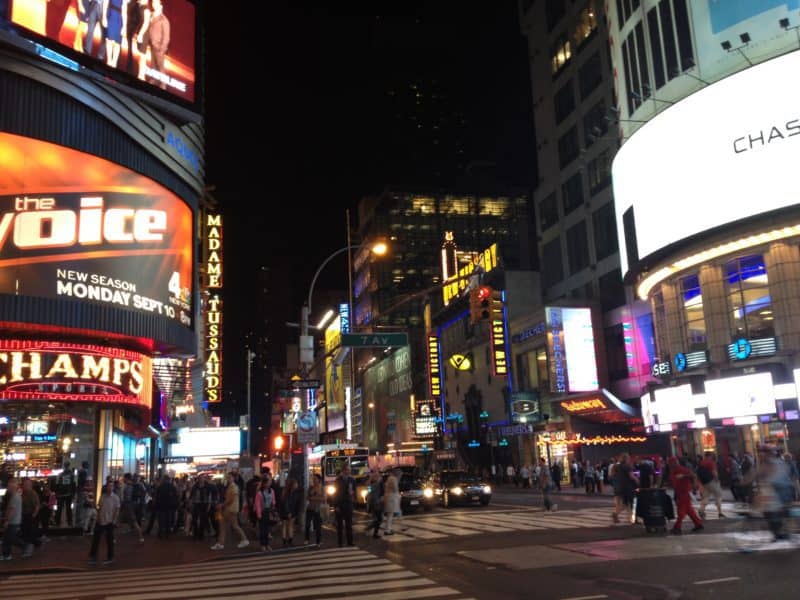 Another problem was food. As I didn’t have enough money to dine at a restaurant at least 2 times a day and our accommodation didn’t have any cooking facilities, I had to eat outside, but in some moderately cheap places. All the cheap food in New York is extremely fat and oily. After 5 days I was like “No, I can’t anymore”. I still can’t look at the Auntie Annie’s products without thinking “Ugh”. I was trying to buy food in the supermarkets (like sushi or smth), but it was just tasteless. So I thought that food is also a big problem in New York City. 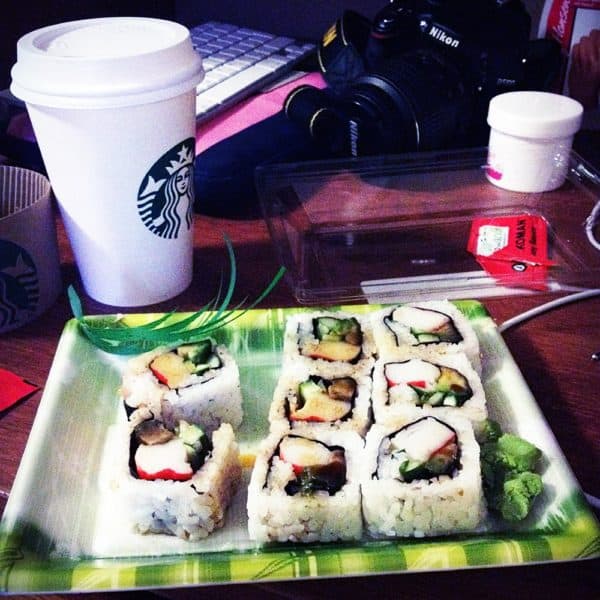 Well, I still think that New York City in winter and NYC in summer are TWO different cities. I would love to return to NYC in winter (especially before Christmas), but I would never ever go back there in summer. NYC is awesome – great for shopping, sightseeing and eating out, but you have to have enough money to do it all. Also, avoid walking there at night (unless you’re walking the 5th of the 6th avenue).

So, what’s the best time to go to New York City? I would suggest you going to New York in the end of fall, in winter and in the beginning of spring.

Wanna read more about best time to go to Iceland, for example? I would say it’s Spring, but you can check the post out and form your own opinion. 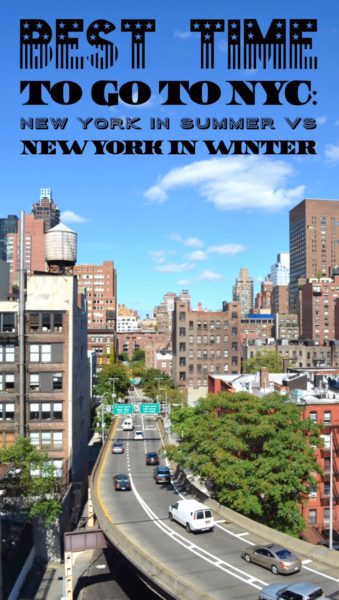