Skip to Content
239 shares
This post may contain affilliate links. It means that if you buy something through one of these links, we might get a small commission at no extra cost to you. Affiliate commission helps us keep this travel blog running.

If you have at least a 4-hour stopover in Bahrain, this post is for you. I’ll tell you how you can spend 4,5,7 or more hours in Manama, Bahrain, whether you need a visa for getting out of the airport in Bahrain and what to see in the capital of Bahrain, Manama.

Why visit Bahrain? Stopover in Bahrain

If you haven’t been to this blog before, hi, I’m Liza and I’m obsessed with travelling. Despite having a 9-5 job that requires me to be in the office once a week, I manage to travel quite a bit and share useful itineraries and travel tips on this blog!

Together with my husband Pepe, we were invited to a friend’s wedding in India (flying to India as well? You might be interested in my post about the most common Indian tourist scams and how to avoid them) and the cheapest tickets were actually with Gulf Air. There was a 7-hour interchange required and I thought ‘why not explore Bahrain in the meantime’? I didn’t hear much about Bahrain before, I just thought that it’s one of these tiny wealthy oil countries. Nonetheless, it was very interesting to see how does Bahrain actually look like and how do people live in the capital of Bahrain, Manama. 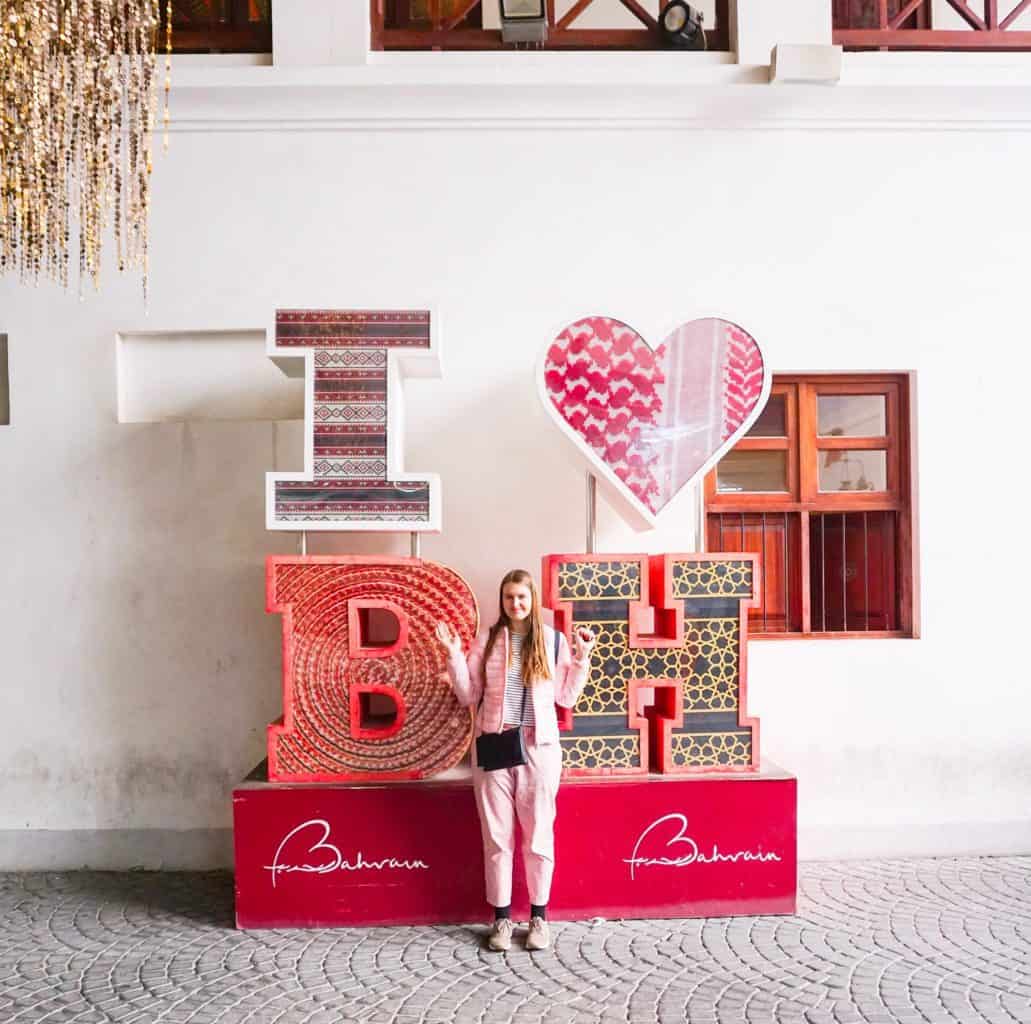 Unfortunately, if you want to go out and see Bahrain during your interchange or a layover, you will have to get a Bahrain transit visa. We applied for our visas in advance on this website. The visa cost was $77 per person. You can check if you’re are eligible for an eVisa for Bahrain (that’s the one we got) on the website I mentioned before.

The passport control at Manama airport was super fast, we weren’t asked many questions at all, and in 10 minutes, we were already getting in a taxi to go to Manama centre. We were surprised that there weren’t many people, who wanted to go out in Manama and explore the city during the stopover in Bahrain. However, I can understand that since the price is pretty steep for just a few hours in the city.

What to see in Bahrain?

Most of the landmarks of Bahrain are actually located in Manama, so your best bet is just taking a taxi to Manama. We paid around $15 for a 25-minute journey, which isn’t very expensive. However, it was complicated to grab a taxi from the Manama Fort (it was our first destination) as there were no taxis. Nonetheless, we managed to ask the Archaeological Museum staff (big thanks to them) to ask for a taxi for us, so we could go explore other parts of Manama. However, if you have internet in Bahrain, you can use this website for ordering your taxi.

Where to stay in Bahrain

If your stopover is longer than 9 hours and you’re looking to rest for at least a few hours, you can book a hotel. There are plenty of hotels that aren’t very expensive and are worth staying there for a few hours and taking a refreshing shower!

If you don’t feel like exiting the terminal, here’s a hotel that is located inside the airport in Manama. You can book it here.

Things to do in Manama, Bahrain during a stopover with Gulf Air (or anyone else really)

If you have more than 5 hours to spend in Bahrain, I recommend taking one of the tours. It would be the easiest way to get to know Manama and learn more about Bahrain in general.

The best-rated Bahrain sightseeing will take you all around the best landmarks in about 4.5 hours. You can check the price and availability here >

If you’re interested in something slightly more unusual, you can take this half-day desert tour that will skip Manama, but will showcase some other amazing places in Bahrain!

Unfortunately, we were pretty broke during this trip, so we couldn’t afford taking any tours. So we decided to explore Manama on our own!

Our first stop was the archaeological museum of Manama and the old fort, where this photo below was taken. The museum didn’t impress us that much, but the fortress was worth visiting! The fortress is a meeting point for many women in Bahrain, who are going for a walk together. In Bahrain, you can see quite a few western-looking women wearing their regular outfits. For example, I’ve seen a woman going for a run in the fort. She was wearing regular jogging leggings (probably Lululemon) and a top and nobody was paying any attention to her.

So if you’re a female and you’re worried about what to wear in Bahrain – don’t worry at all. I wouldn’t recommend wearing mini skirts or dresses, but you’d be totally fine in a midi or maxi skirt or jeans and a T-shirt. 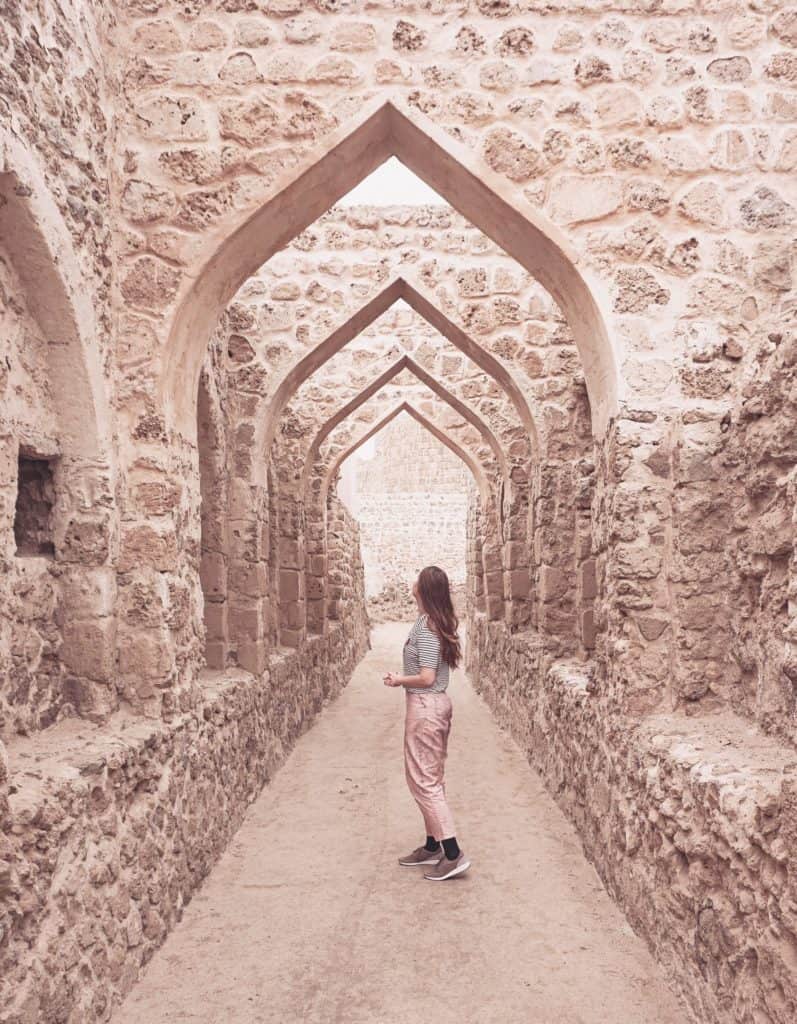 Our second stop was actually the Gold Souq. We expected something lavish, like the Gold markets in Dubai, but it was actually just a normal building with small outlets selling gold. We walked around a couple of streets nearby and looked at the local market stalls. Many of the outlets sell the pashmina scarves for just $5, but they aren’t real pashmina, just synthetic. But they look pretty, in case you’d like to buy one. There are, however, some exciting and interesting stalls at the Gold Souq, so I recommend visiting it! 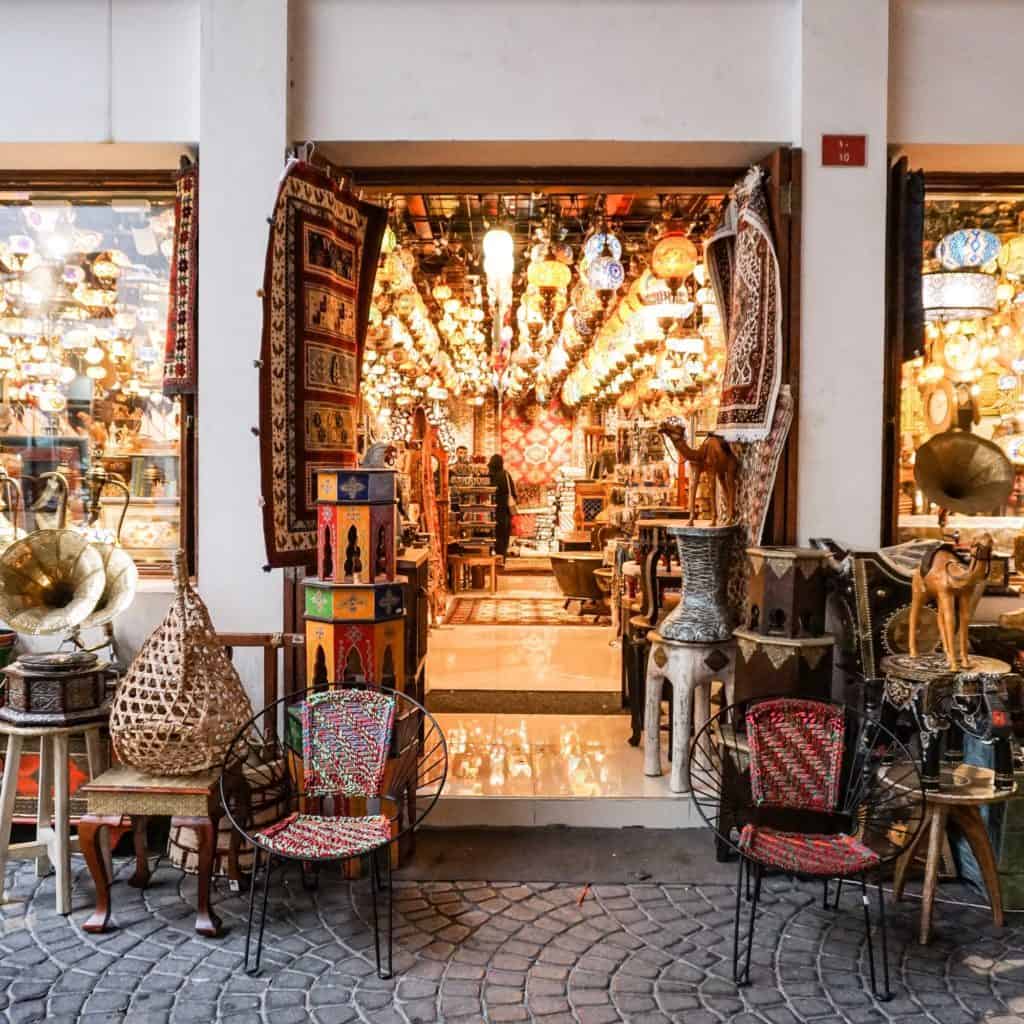 Traditional Breakfast near the Gold Souq

If you have more than 7 hours in Bahrain, you can make it to the Al Fatih Grand Mosque. It was only built in 1988 (very recently), but it’s one of the most important landmarks in the city. 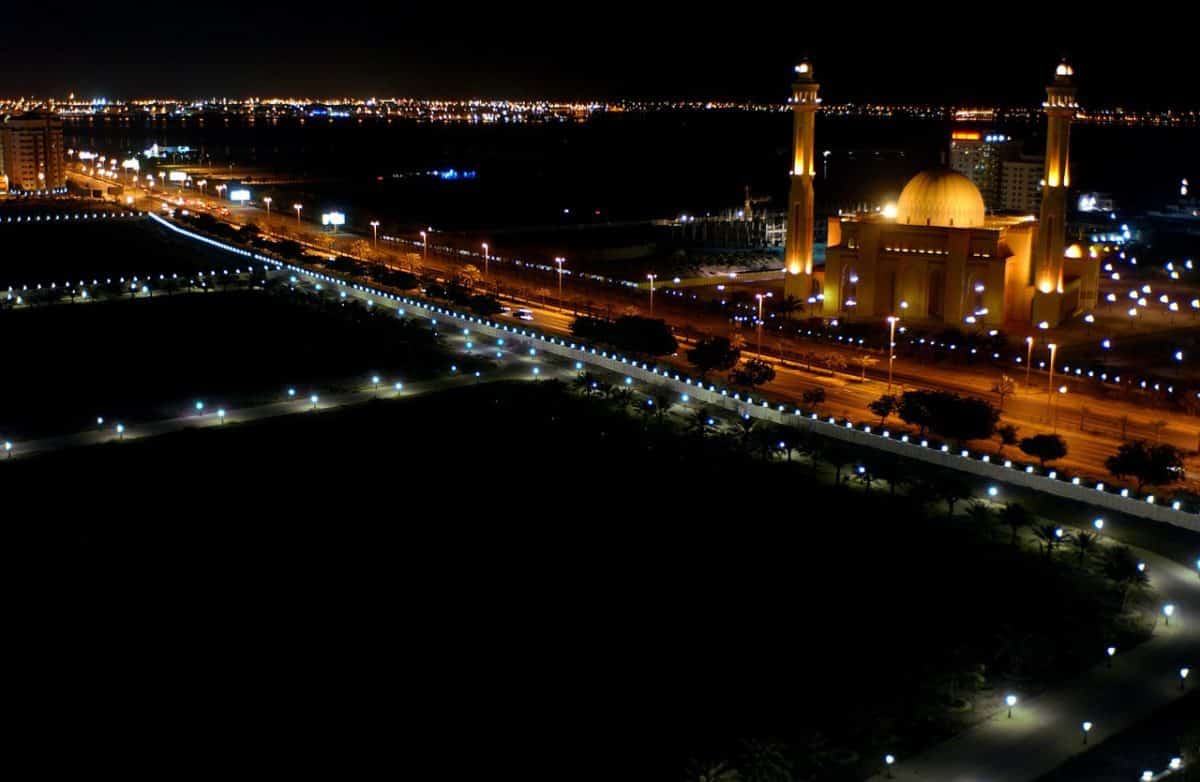 If you still have enough time left, you can head to Bahrain National Museum that was also opened in 1988 (seems like 1988 was a very important year for Bahrain). The museum has a lot of archaeological artefacts and even a Natural History hall. If you’re having a stopover in Bahrain with children, you can definitely head there, as it would be interesting for the children.

Bahrain really surprised us. We both thought that it’s more luxurious and lavish, but we haven’t seen a single golden car (like the ones driving the streets of London – however, those ones are from Kuwait. Bahrain left a nice impression of the country, where people live a quiet life. However, there are not many famous and exciting landmarks, that is why Bahrain is often overlooked by tourists. Also, Bahrain isn’t a very walkable city, so you’ll have to find a taxi all the time you need to go somewhere. The layover in Manama was a perfect opportunity to explore Bahrain without going there on a separate trip and we are happy we had a chance to see it! 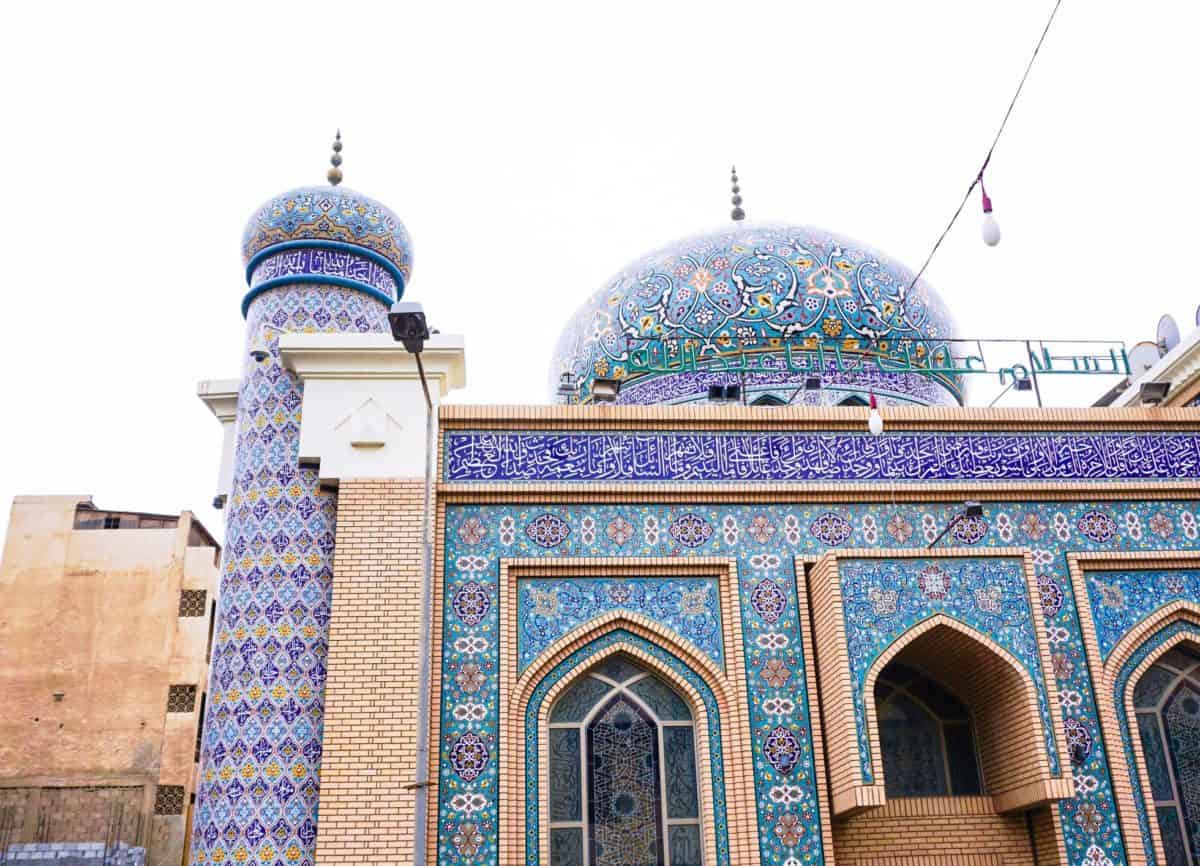 Finally, our opinion of Gulf Air

If you expect Gulf Air to be like Etihad or Emirates, you’ll be very disappointed. Gulf Air operates quite dated planes: our screen was broken, the food was very disappointing, but the worst part is really the customer service. After the incident on the plane, where I was harassed by a psychologically unstable passenger on the New Delhi – Manama flight, who started threatening me, insulting me and shaking my seat and we didn’t get any help from the crew. We wrote a formal complaint to the airline, just to get an impersonal reply saying that the crew behaved as instructed. There was no apology from the airline or anything at all. For sure, we will never ever use Gulf Air again, but if you’re planning to see Bahrain during a stopover, this terrible airline is pretty much your only option.

Liked this post about what to do in Manama, Bahrain during a stopover? Share it on Social Media.

I HAVE HERD THIS THING FROM MANY PEOPLE WHO HAVE VISITED MANAMA, THAT IF YOU WANT TO KNOW MUCH ABOUT BAHRAIN, YOU JUST NEED TO VISIT MANAMA, NOTHING ELSE. Btw, hOW IS THE CITY IN TERMS OF EXPENSES?

I visited Bahrain and it was good to read your perspective. Thanks. And I am glad I dint fly Gulf Air. I had Etihad and my stop over was Abu Dhabi.