Doing a road trip around Ireland during just one weekend might sound tough but definitely not impossible. In this post, I’ll tell you about our Irish road trip experience.

What to do if you want to travel, but don’t have enough vacation days? Travel on the weekends. If you plan your trip effectively, you’ll be able to see and explore pretty much just within a couple of days. In the case of Ireland we only had 1.5 days, but yet managed to do a road trip around Ireland and see many places, including Doolin, Cliffs of Moher, Galway and a bit of Dublin.

We arrived at Shannon airport from London Stansted via Ryanair. It was cheap and fast. However, my way to Stansted deserves a separate post. In case you’re just like me need to obtain visas for almost every country, you can visit Ireland with and Irish visa or a UK tourist visa (I had the latter).

Passport control was very fast and smooth and already in 5 minutes, we were signing a contract with a car rental service. It makes sense to try to exit the airport among the first people because really many people hire a car in Shannon. Just behind us, there was a queue of 10 people.

Hiring a car is a sort of a must in Shannon. Without it, you won’t be able to get anywhere, thus a road trip around Ireland would be impossible. There are buses, but the routes are limited and operate only during certain hours. That’s why most of the people go for hiring a car – you’re more flexible and can go wherever you want. I would recommend you http://rentalcars.com – we hired already twice with them and were happy!

On the way to Doolin

Since our flight was already in the evening, we decided to go to our hotel right away. We booked a room in a Limestone Lodge guesthouse in Doolin, or, to be precise, around 1.5-2 km away from Doolin village. It had a spectacular rating of 9.5 out of 10 and a beautiful view of the ocean. Limestone Lodge was really awesome, I have nothing to complain about, only the way to Doolin was a bit too long and very creepy.

What is Doolin and why we decided to stay there? Well, Doolin is a remarkable village in the West of Ireland famous for its pubs with live music. We had a chance to listen to some music and it was great. However, note, that if you arrive a bit late, you won’t be able to find food anywhere in Doolin – they stop serving food after 9:30 pm.

Unluckily, we had a road accident on our way from Shannon to Doolin and got stuck in a drain on some really narrow village road. However, we were helped by very friendly and amazing locals, who helped us to push the car and get it out of the drain! I must admit that I haven’t seen such friendly and helpful people anywhere I been. So Ireland, you’re on top!

So well, we were able to get to Limestone Lodge, but we’re late for dinner. But then again, Irish people surprised us and served us soup when we told them about our accident. Even though the kitchen was already closed!

As for Doolin, I think I’ve expected something more crowded and located in one place. Either we didn’t find the proper places, or it’s really spread around multiple streets with 1-2 pubs on each of them. We had some beers, Dooliner Ale was just awesome – definitely recommended and got back to the hotel.

We woke up quite early and had a breakfast in a wonderful room with the sea view. We got full Irish breakfast, which looks like that (better than explaining anyways): 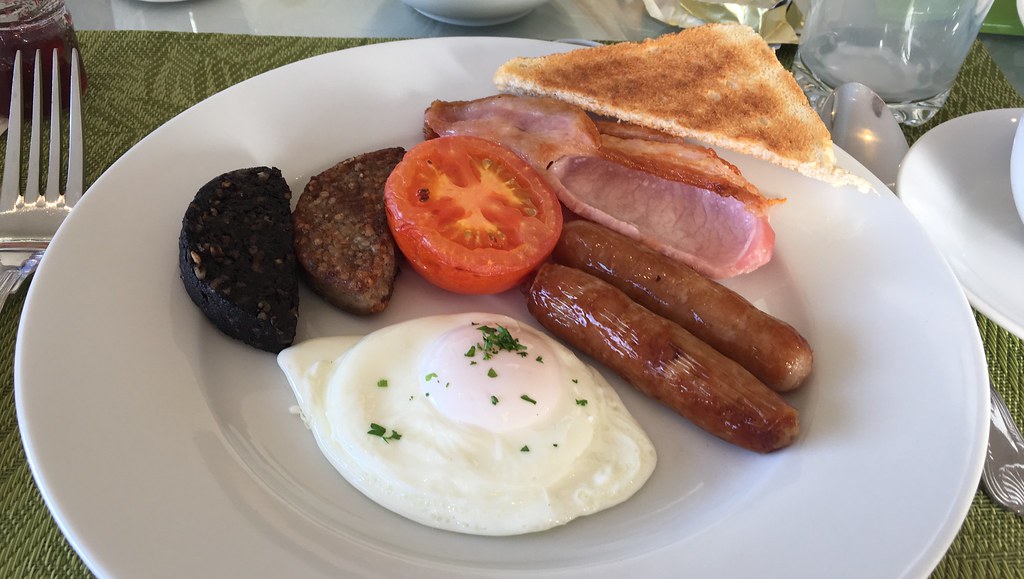 It’s truly amazing. The admission is 6 euros, but it’s worth it! The views were really breathtaking, however, the only problem was the crowds. We were lucky to have some sunny weather that day and seems like all the tourists also didn’t want to miss the chance to see the cliffs in the sun.

In some places it was really risky – you could climb the fence and stay on the edge of the cliffs having nothing in front of you, just water. It was possible to take some awesome photos, though.

In total, we spent 1.5 hours at the cliffs and left, when it just started raining. The weather really changes a lot in Ireland – it can rain three or four times a day or even more!

From the cliffs of Moher, we headed straight to Galway – amazing fisherman’s town in the west of Ireland. The way there took a bit longer than expected, about 2 hours. The road is really narrow and if you encounter some bike riders on your way, you’ll have to ride behind all of them for some time!

However, Galway is worth it! It’s so colorful, cheerful and full of people! It has plenty of restaurants with fresh seafood, some shops, and souvenirs. I would spend there more than a couple of hours, of course, if we had time.

From Galway we headed straight to Dublin, that was the last point in our road trip around Ireland. In our plan, we had around 1.5 hours there, but since we had to return the car and avoid any trouble, we went straight away to the airport, but through the city centre (in order to take a glimpse of it). In total, the way from Galway to Dublin took around 2 hours 40 minutes and was less than 5 euros (the motorway had tolls).

In case you have good connections to Shannon airport and Dublin airport, this trip could be a nice weekend trip option. Road trip around Ireland doesn’t sound like a bad option, huh?

Feel free to ask any questions 🙂

What a fabulous road trip! I've visited the Cliffs of Moher and Doolin as well, driving along the Wild Atlantic Way from Kerry to the Connemara and had the best time! I think we both need to go back!