What can be better than Rome weekend break? Or a romantic weekend in Rome? Check this post for ideas for the perfect weekend break in Rome!

We just came back from Rome. Finally, we have been able to see each other again and such short trips became our casual once-a-month activity. Perks of having an LDR (ref. long-distance relationship). We both have been in Rome before, separately, of course, being part of those huge groups of tourists wandering around and queueing for all the main landmarks.

You know, it’s pretty hard to plan the weekend trip if two of you live in different countries. The destinations are usually limited and arrival/departure times usually don’t match. Personally, I don’t like arriving much earlier. Or much later. In the perfect situation, you arrive at the same time in the same airport and go discovering the country together but then can almost never happen.

It’s amazing when you have a whole week so spend in one city: your traveller’s pace can be much slower and there is no need to walk until your feet are sore. But life is unfair and often you have only a weekend so spend in one of the most amazing cities on earth.

Weekend in Rome in February

Romantic trips are usually very different from the trips with the main purpose of sightseeing. During the romantic trips, you usually want to have a dinner in a cosy place and walk at night, holding hands and talking about life preferably in a nice neighbourhood :D.

We went to Rome for a Valentine’s Day weekend and I feel like it cannot be more romantic than that.

Check this article to learn about other great Valentines Day Getaways.

We decided to be accommodated in the city centre two blocks away from Vatican and chose the hotel Della Consiliazione. (Well, honestly, Pepe decided all that, since that trip was a “surprise trip” and I didn’t know where were we going until he told me one week before the flight).

The hotel was great. Never had a room with a personal huge terrace and the view of St. Peter’s Cathedral and the spa bathtub in the room. ❤️ 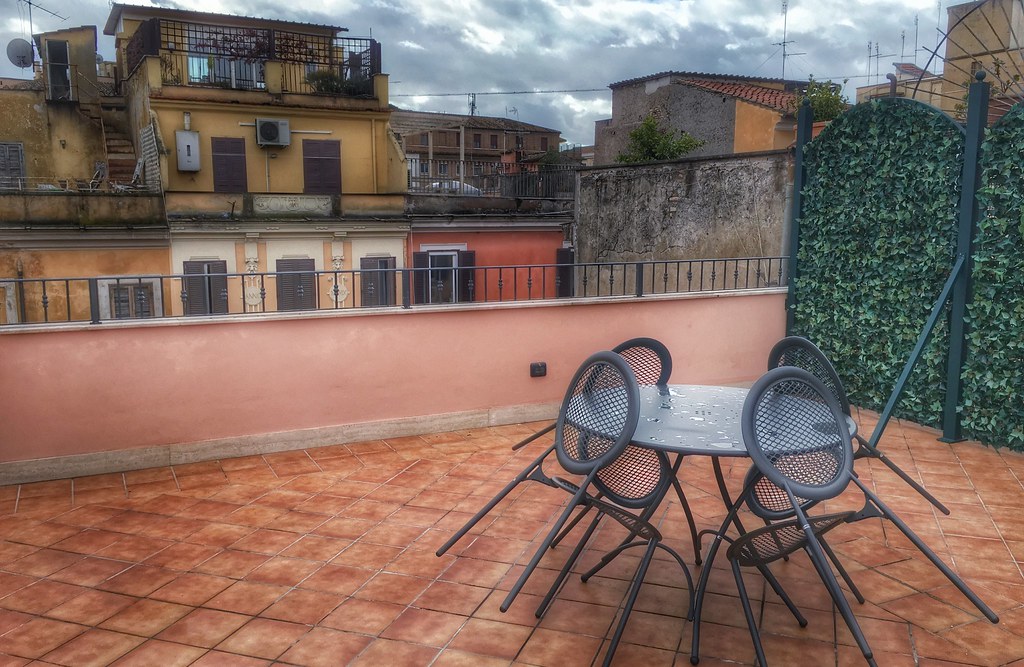 Our hotel had a lovely terrace

The Borgo street is famous for nice cosy restaurants and cheap pizzerias. Our hotel was ca 800 meters from the nearest metro station and ca 400 meters away from a bus stop, where you could take an express bus 40 (to Colosseum, Termini, and many other places). 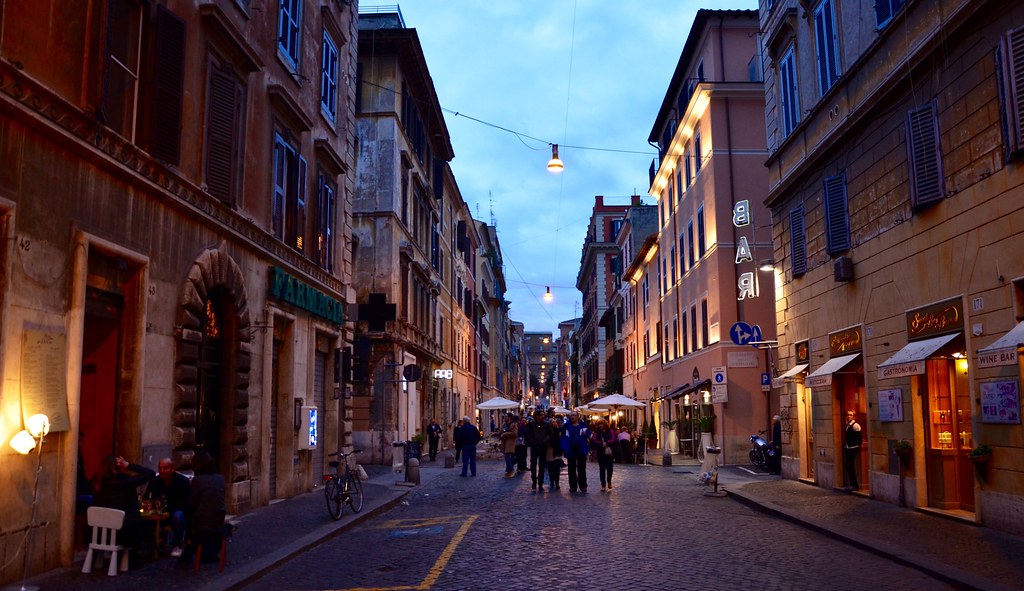 The street, where we stayed in Rome

We checked in, unpacked, had a late lunch in one of the pizza places and went to see Vatican. It was already twilight, around 5 pm, and St. Peter’s Cathedral looked more beautiful than ever. The entrance was free and there was no queue at all. Luckily for us 🙂

Later we went to the bridge in front of the Castel Sant’Angelo to take some photos (well, it took like 20 minutes because I wanted a perfect photo and finally I got it so we continued). 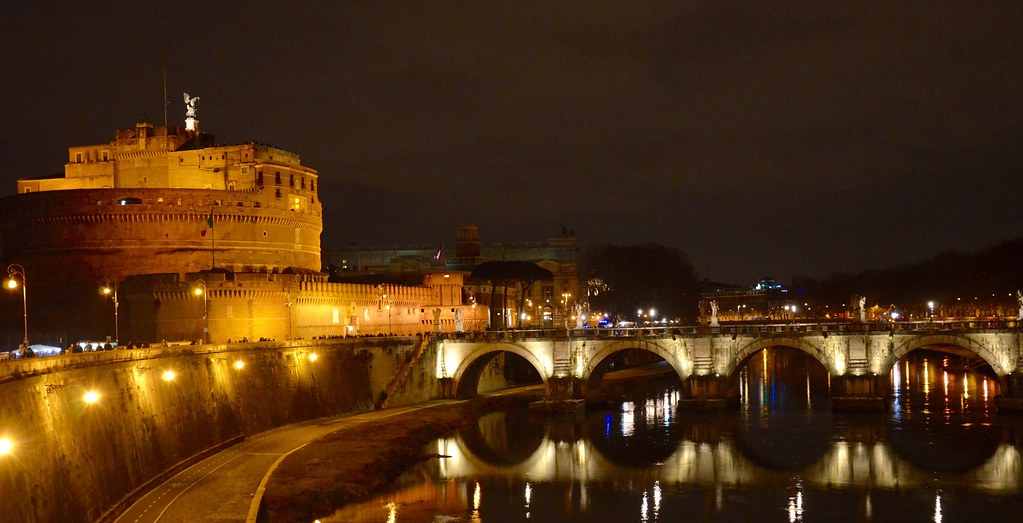 We discovered some amazing cathedral on our way. And arrived at the Piazza Navona.

At the square, there were many Italian restaurants with the terraces and lots of people sitting outside and enjoying the marvellous view. Guess what we did. Actually, in February, it is still quite chilly outside but most of the restaurants have some heating devices so their customers don’t freeze to death. It was perfect to sit there even without a coat. 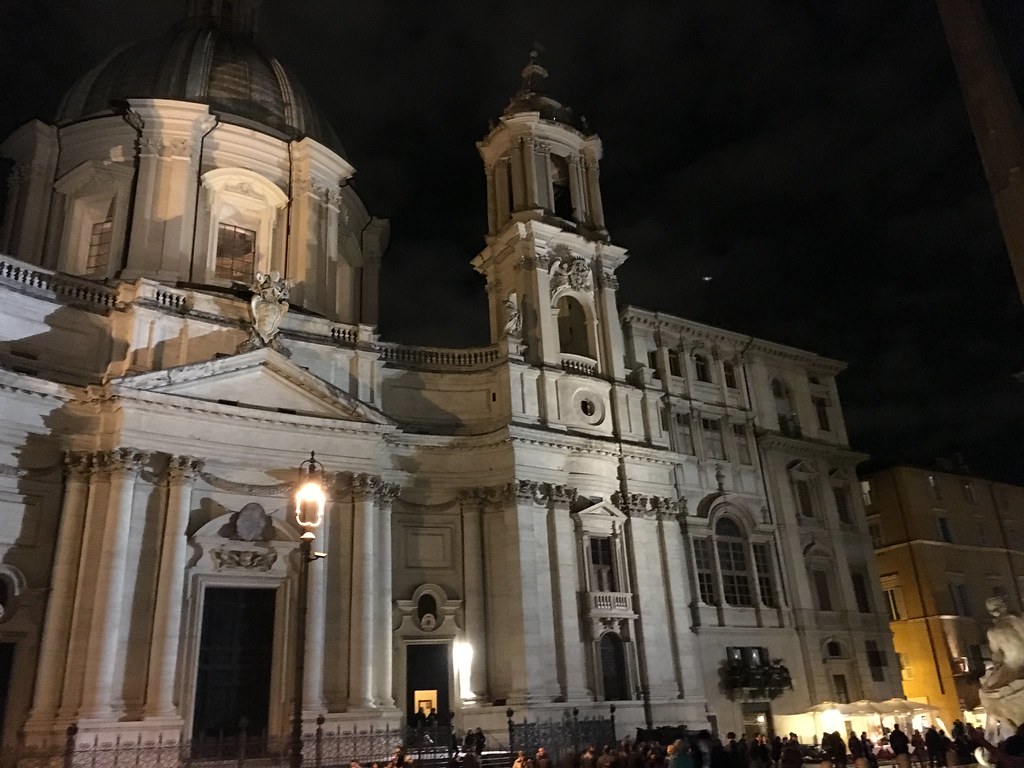 Later we headed back to our hotel room, changed the clothes and went out looking for a nice lounge/bar for some drinks. Unfortunately, Borgo appeared to be not the best nightlife place. On our street, there were just 2 bars, both of them very hipsterish and crowded – not precisely what we were looking for. We were too tired to go to the nightlife district -, so we continued walking around and surprisingly found a good looking bar, TED. However, in the end, only the interior appeared to be nice. A cocktail was on average 10-12€ (it’s quite expensive even for Rome), and both ones we ordered weren’t good at all. Actually, the first cocktail I ordered was called Ted’s Margarita and it was absolutely non-drinkable. Never had anything so disgusting in my life (and I’m not a very picky person), so we asked for the replacement, a normal Margarita instead. It was very average but at least, it tasted like a cocktail :). The other cocktail, Aperol Spritz, was very average too. During the weekends, most of the bar-like placed close at 2 am, so we left and went back to the hotel.

The second day of Rome weekend break was actually the Valentine’s Day. I got the impression that the Valentine’s Day is not celebrated in Italy since there were no mentions of it anywhere and no decorations at all. I remember, New York City was decorated very well for this day with a huge heart on the Times Square.

We took the only possible bus 40 and went to the Piazza Venezia. 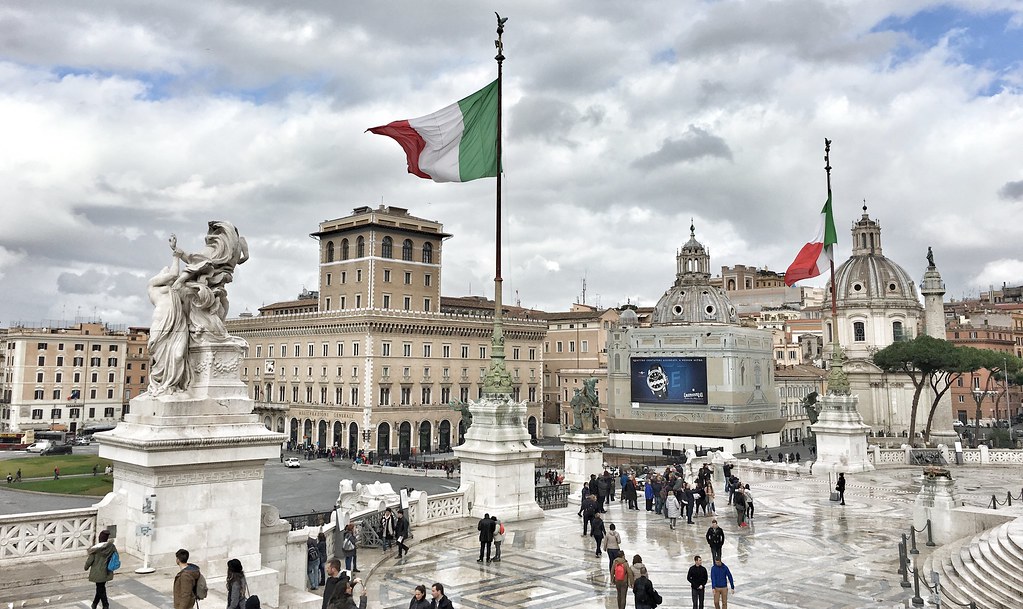 That’s my favourite part of the city because it’s full of various buildings from different eras: modern streets, older palaces and ruins of the Roman forum, and most importantly, Colosseum in the background of those ruins. If you want to climb on the lower terrace of the palace, it’s free. If you want to get to the top, it’s 7€.

In case, you have no selfie stick or forgot one, you can buy one in Rome literally at every corner. Almost like the keychains with Tour Eiffel in Paris 🙂 same principle. Even if you already have a selfie stick and hold it in your hands, you will still be approached and offered another one.

The walk from the Palazzo to the Colosseum is amazing and not as crowded as I expected. 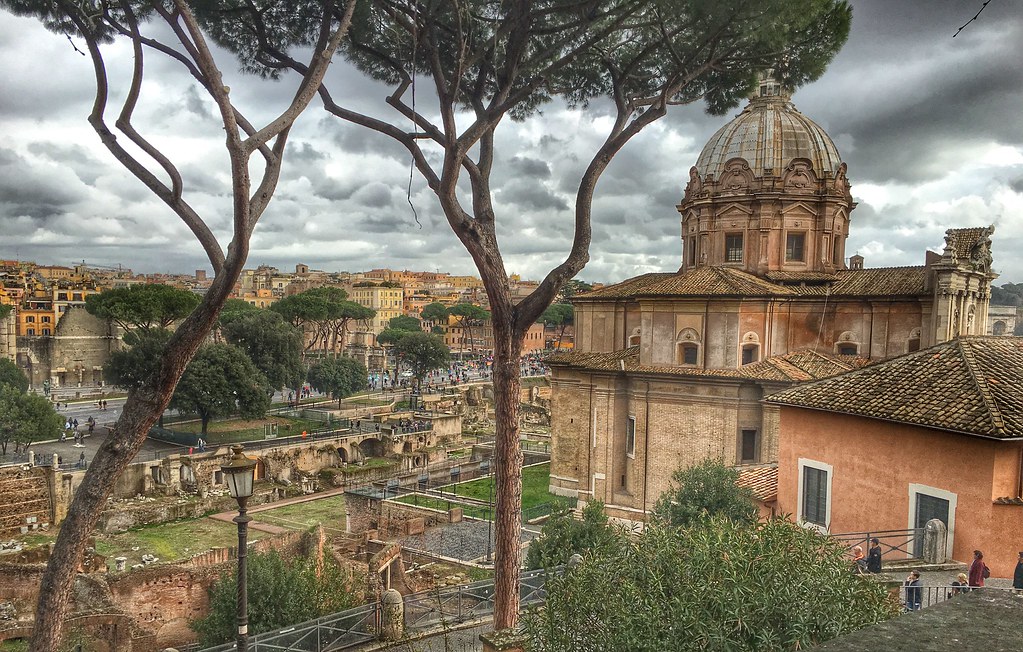 Later, we took the metro train to the Fontana di Trevi. On the way to the fountain, we found an amazing restaurant called … There was a daily menu offer for 13 € pp, which is a great price for Rome. Gosh, I never thought that it will be so much food: salad, first course, second course and a dessert. Everything was perfect. Even the white house wine.

Trevi fountain seems to be the most crowded place in the whole Rome! Kissing in front of the Trevi Fountain on Valentine’s Day is maybe not the best idea because you will be pushed from all the sides and well, that’s not romantic at all. 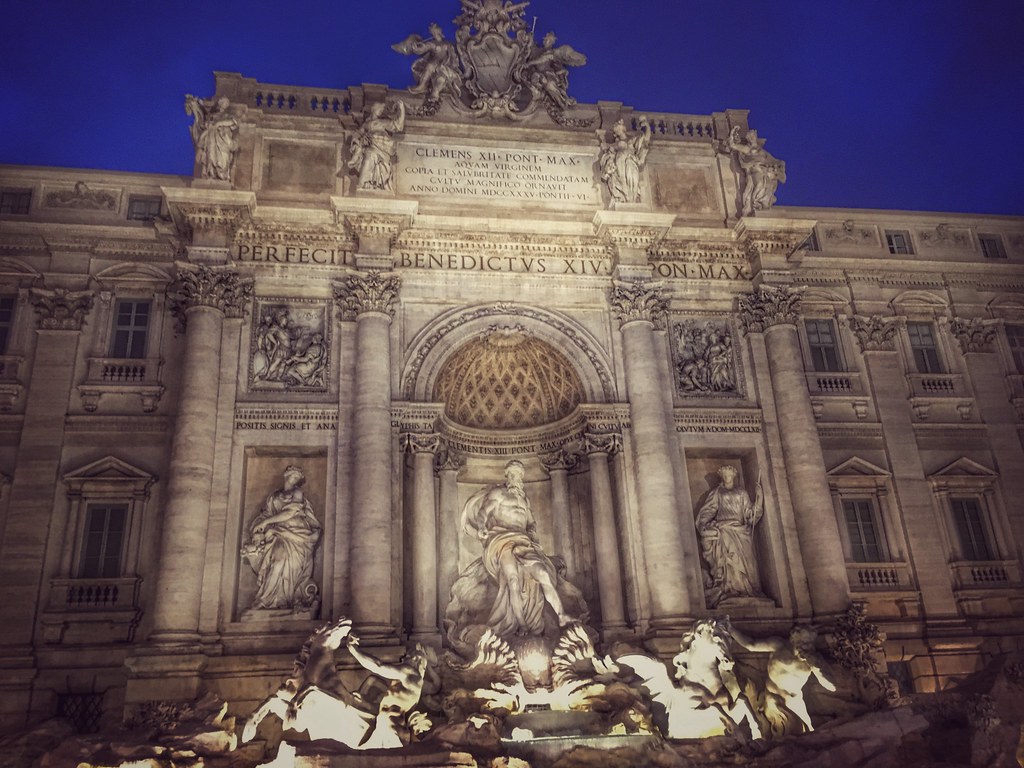 We walked through the narrow streets of Rome towards the Pantheon and from there back to Piazza Navona. It wasn’t so late but my feet were dead so the best possible option was heading back to the hotel with a bottle of nice Italian sparkling wine in order to celebrate the Valentine’s Day.

My flight was quite early next day so it wasn’t possible to discover more things but I think that all we saw was already great for the Rome weekend break 🙂 in case you’re planning a romantic trip, you could do something similar to what we did. Rome weekend break might sound like a perfect option for couples. In general, Italy during winter sounds like a good idea, so don’t hesitate to visit this amazing country!

Liked this article about Rome weekend break & romantic holiday in Rome? Save it on Pinterest: