Skip to Content
191 shares
This post may contain affilliate links. It means that if you buy something through one of these links, we might get a small commission at no extra cost to you. Affiliate commission helps us keep this travel blog running.

In this post, I would like to tell you about another city, which held the FIFA World Cup 2018 in Russia – Nizhny Novgorod. Keep reading for the best things to do in Nizhny Novgorod as well as attractions, restaurants, how to get to Nizhny Novgorod from Moscow and St. Petersburg and much more.

[vc_row][vc_column][vc_message message_box_color=”juicy_pink” icon_fontawesome=”far fa-grin”]If you’re new to this blog, hi, I’m Liza. I was born and raised in beautiful St. Petersburg, Russia and in the last 4 years of blogging, I created over 40 articles about travel to Russia, from the transport guides to the safety tips! Click here to access all the Russia posts >>>[/vc_message][/vc_column][/vc_row]

Best things to do in Nizhny Novgorod, Russia:

First of all, don’t confuse Nizhny Novgorod with Veliky Novgorod (a smallish city close to St. Petersburg). These are two completely different cities and in this post, I’m going to talk about Nizhny Novgorod. Yes, it’s very confusing that two cities have similar names and it’s especially confusing that there are many day tours sold from Saint Petersburg to Veliky Novgorod, but don’t think that these two are close: they aren’t.

If you ask me, which one is better, Nizhny Novgorod vs Veliky Novgorod, well, they are very different. Veliky Novgorod is a very old city, which used to be very important in the 12-13th century and it has an incredible amount of Russian heritage buildings (churches, cathedrals, monasteries). It’s also very small and compact, that’s why you can discover it in a day. Nizhny Novgorod, on the other side, it quite big (its population exceeds 1.2 million people) and it’s quite close to Moscow. It also has a lot of Russian traditional heritage (such as a big Kremlin) and it’s a great place to visit as well. 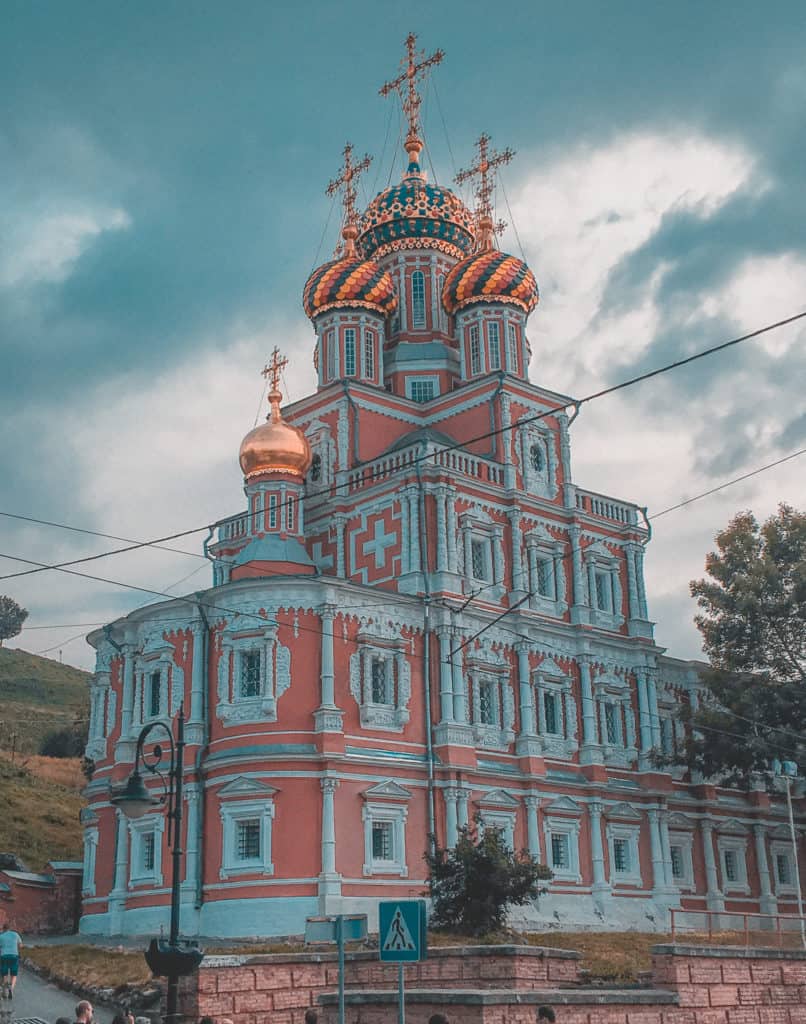 I visited Nizhny Novgorod, Russia only once in my life for 3 days (we went to an EDM festival called Alfa Future People, which can be considered one of the best EDM Festivals in the world. In case you’re interested – here’s the link to our review of Alfa Future People 2016). However, Nizhny left a really great impression on me. It’s beautiful, interesting, vibrant and lively. It’s also full of contrasts – incredibly beautiful city centre with a huge Kremlin in the heart of Nizhny Novgorod and Soviet-style districts next to the main railway station. Flourishing streets in the city centre with lovely restaurants and decaying wooden buildings just 15 minutes walking away. 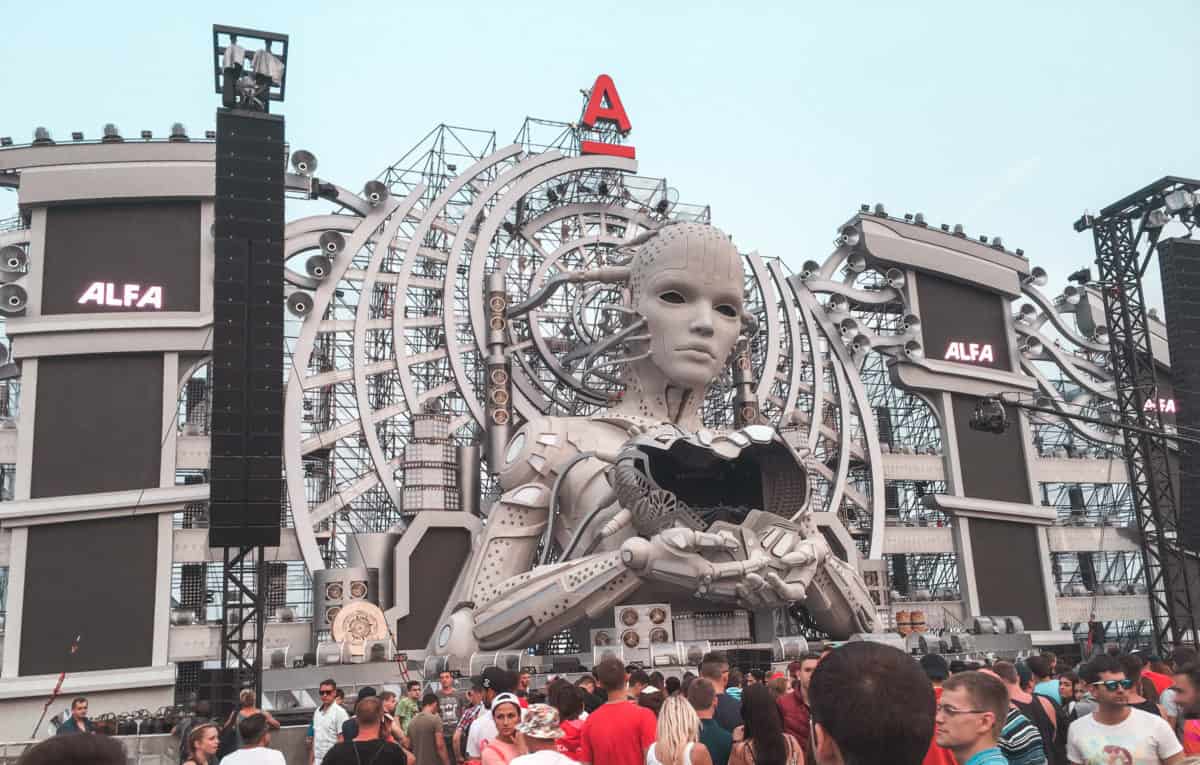 Unlike St. Petersburg and Moscow, Nizhny Novgorod is a truly Russian city. Moscow is too rich – all the money of Russia is concentrated in Moscow, hence the most expensive and exclusive places are located there. Moscow is a melting pot of many people from all around Russia (remember that Russia is massive) with their different ways of speaking, communicating and solving problems. People in Moscow can be rude and harsh and also pretty unfriendly. And of course, Moscow is severely overpopulated. If you want to read more about Moscow – here’s my post about it.

St. Petersburg is the total opposite of Moscow. It’s a European city (which looks nothing like typical Russian cities) and resembles Paris, Vienna, Venice and Amsterdam all at once. St. Petersburg is quite expensive, full of historical sites and museums, amazing restaurants with terraces with the view over the city, rivers where you can take boat rides and friendlier people than in Moscow. I am originally from St. Petersburg, so I created this ultimate guide to St. Petersburg, Russia in case you’re interested in visiting the city.

Nizhny Novgorod, unlike Moscow and St. Petersburg is neither overpopulated or posh. It’s a nice quiet (and quite big at the same time) city with beautiful streets in the city centre, amazing river Oka dividing the city into two parts and having incredible views over the city when crossing the river.

The easiest way to get to Nizhny Novgorod from St. Petersburg is by plane: you can buy return flights for as low as £100 and the journey time is about an hour. You can check the prices for your dates on Skyscanner.

The easiest way to get from Moscow to Nizhny Novgorod is actually by train (because these two cities aren’t far from each other). You can fly, of course, but it’s just easier to take a train. There are normal trains that take around 5 hours and the speed trains that take 3.5 – 4 hours and are actually cheaper than the slower trains – they are around 12 euros one way. There are also buses (the journey time is 5-7 hours). The easiest way to buy the train tickets from Moscow to Nizhny Novgorod (and just generally the train tickets in Russia) is via Tutu.

What is there to do in Nizhny Novgorod?

Novgorod has an impressive Kremlin. Check the opening hours on the main page of the Nizhny Novgorod Kremlin.

2. Have a meal in a traditional Southern Russian restaurant 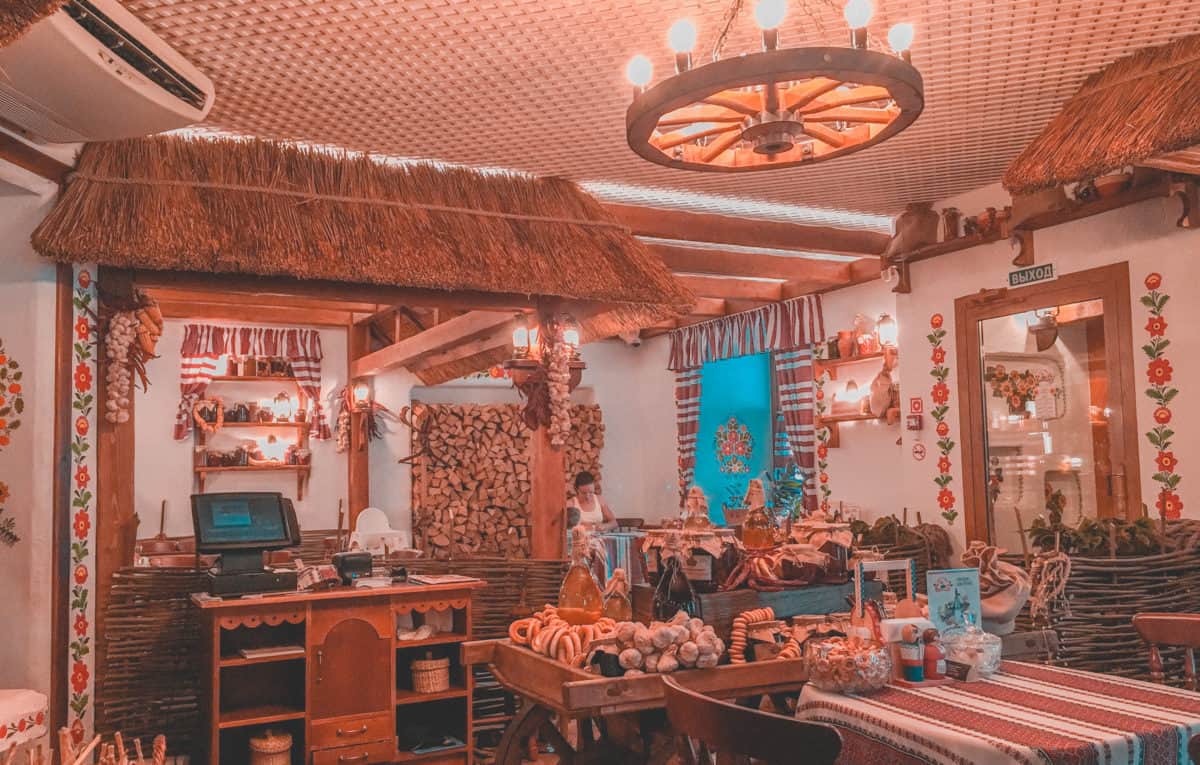 3. Have a stroll around the streets in the city centre

The old town is really pretty and walkable – no cars allowed on the main street, so it’s just nice to walk around and explore the city.

4. Take multiple photos with small monuments in the centre

Novgorod has an insane amount of cute lovely statues all across the city – it’s just impossible not to take a photo with one (or some) of them!

5. Have a burger in one of the hipster places of Nizhny

Meat in this part of Russia is really good, so burgers are awesome in Nizhny Novgorod.

6. Visit one of the churches and monasteries of Nizhny Novgorod 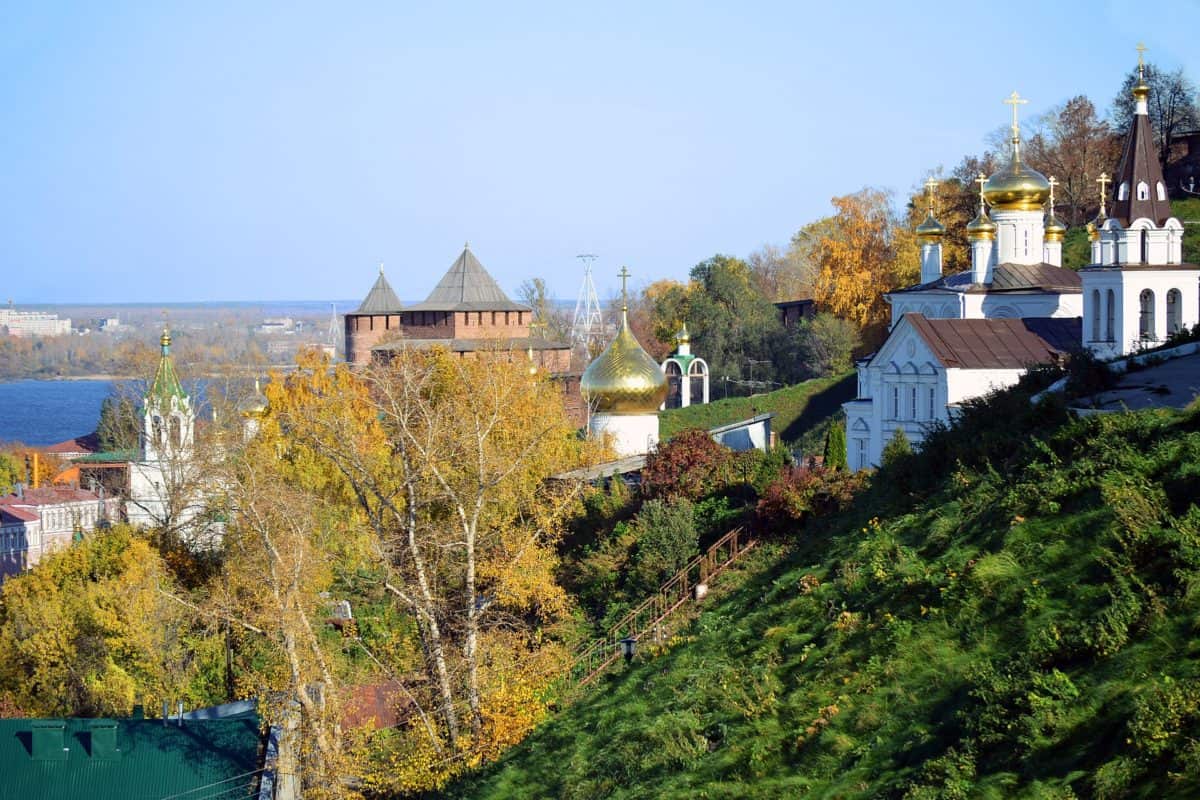 7. Take a look at the abandoned buildings in the city centre

There are many old abandoned wooden buildings in the heard of Nizhny Novgorod, so it’s one of the “cool” and unusual things to do in Nizhny Novgorod!

8. Walk around the Fedorovsky embankment

The walk is really nice and the views are incredible from there (you can see almost the entire city!).

9. Take one of the tours around the city

There are plenty of tours to take in Nizhny Novgorod, but the free walking tour is sometimes the best. Check the availability now.

There many hotels & hostels to stay in Nizhny Novgorod. We stayed at the Hotel Parus and really loved it. It even had a jacuzzi inside the room – it was perfect after visiting the EDM festival – we were exhausted. Some other hotels to consider Sheraton Nizhny Novgorod near the Kremlin (it’s a super budget-friendly Sheraton – less than 80 euros), Nikitin Hotel (literally the best-rated hotel in the city).

Some budget-friendly hotels in Nizhny Novgorod are Hotel Vorobei and City Hotel Sova.

The best hostels in Nizhny: Friends Club Hotel and Hostel and Berry Hostel. 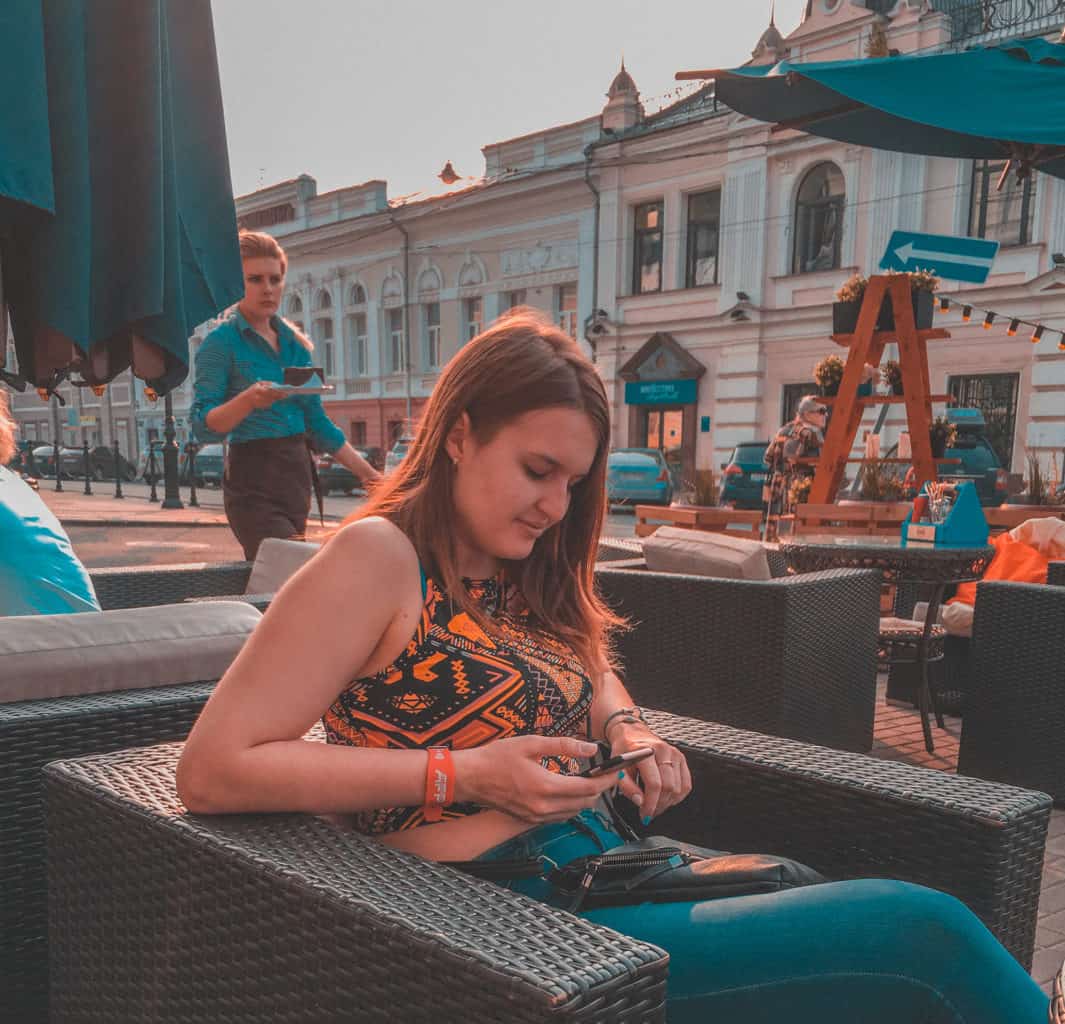 We went to quite a few restaurants during our stay in Nizhny Novgorod and I’d love to recommend you some of them: 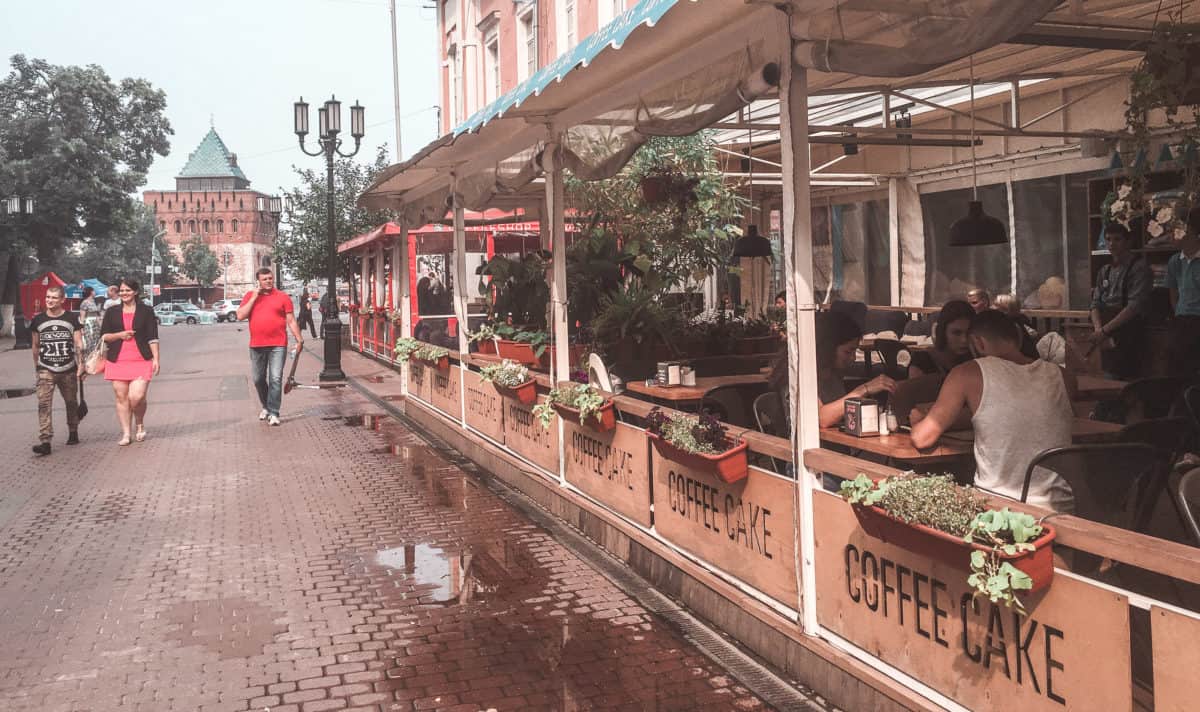 Getting around Nizhny Novgorod

Novgorod has some really bad transport issues – the metro doesn’t really go anywhere and the buses are quite confusing even for Russians. If you want to get anywhere at all, it’s always better to use Uber or Yandex Taxi or any other taxi app that works in Nizhny Novgorod. Should you have any questions, please don’t hesitate to ask!

If you’re interested to read some of my other posts about travelling in Russia, here are some of them:

2 days in Moscow: the best itinerary

Best things to do in St. Petersburg, Russia

Where to see ballet in St. Petersburg, Russia

Cruise in Karelia, the North of Russia

Liked this post about Best things to do in Nizhny Novgorod, Russia: attractions, restaurants & more? Share it on Social Media!